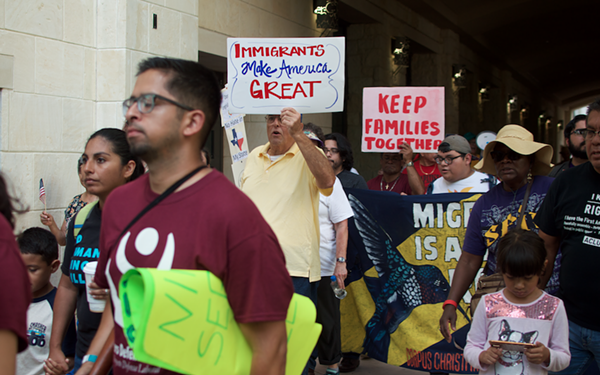 Just two days before Senate Bill 4, more commonly known as the “sanctuary cities ban,” was set to be enforced, a federal judge in San Antonio temporarily blocked the law from being enacted while the lawsuit between several cities and organizations against the state will continue to play out.

SB 4, as signed into law, would allow local law enforcement to inquire about immigration status when detaining or arresting people, and would punish law enforcement officials for implementing policies to prevent their officers from doing so. Additionally, the law would make it mandatory for local law enforcement to comply with all ICE detainers, which are requests to hold people in jail for up to 48 hours after they would have otherwise been released, so that they may be questioned or picked up by ICE if their immigration status is in question.

In a 94-page order released Wednesday evening, U.S. District Judge Orlando Garcia ruled against two provisions of SB 4: for now, local jails will not be required to comply with all ICE detainers, which Garcia determined was a violation of the Fourth Amendment, and law enforcement leaders cannot be barred from implementing policies that discourage officers from inquiring about immigration.

SB 4 was signed into law by Governor Greg Abbott on May 7, during an unannounced Facebook Live video shared on the governor’s official Facebook page — but was met by an immediate lawsuit from civil rights lawyers representing Texas' largest municipalities, including San Antonio, Houston, Dallas, Austin and Bexar, El Paso and Travis Counties, who all joined an initial lawsuit brought on by El Cenizo, a small border town with a population of about 3,300. Local governments in other cities, including San Marcos, Rio Grande and Laredo, voted to support the lawsuit by filing amicus briefs, or legal documents in opposition to SB 4.

Although a more permanent outcome remains to be seen until the lawsuit goes to trial, the ruling provides some insight on how Garcia may rule in the future. The fact that the law was placed on hold (known as a preliminary injunction) is a sign that the cities and organizations who presented arguments against SB 4 presented convincing evidence and that temporarily blocking the law outweighs any potential harm that could result if it were implemented on September 1.

And while the more than 1,600 people who testified against SB 4 in committee hearings during the 85th Legislative Session were unable to sway GOP lawmakers from voting against the bill, their protests were not in vain: In his ruling, Garcia acknowledged that the testimonies and opposition from five of Texas’ biggest cities (Houston, Dallas, San Antonio, Austin and El Paso) were representative of “public opposition to SB 5 and the overwhelming public concern about its detrimental effect.”

San Antonio City Councilman Rey Saldaña was one of the many local officials who testified against the bill at the capitol and led the charge to get San Antonio to join the SB 4 lawsuit. “Facing the possibility of being removed from office and fined could never deter me from doing what I wholeheartedly believe is the just and right thing to do for our immigrant community and the safety of our entire city,” he said in a statement issued shortly after the ruling. Saldaña and Mayor Ron Nirenberg shared their immediate reaction to Garcia’s ruling in a short Facebook live video, taken in the middle of a City Council hearing.

“This is a big deal, so we wanted to come on really quick and update you,” said Nirenberg. In a more official statement, he said the order was a “victory for common sense and our San Antonio values.”


“This law would have diminished the capacity of our local police officers to keep our communities safe and would have targeted members of our community,” Nirenberg said. “Today, San Antonio gets to refocus its efforts on being the most inclusive and welcoming city in the nation.”

Law enforcement officials across the state have repeatedly condemned SB 4 for working against public safety. Not only would it distract law enforcement from their local priorities, they argued, but it could deter immigrant members of their communities from coming forward to report crimes, out of fear police will hand them over to ICE.

In April, Houston Police Chief Art Acevedo revealed the number of Hispanics reporting rape was down 42.8 percent from the same period last year, and reporting of other violent crimes had decreased by 13 percent.

Bexar County Sheriff Javier Salazar told the Current he’s already seen a few instances where undocumented San Antonians have refused to give witness testimony or visit the courthouse, out of fear they'll be handed over to ICE.

Both Salazar and San Antonio Police Department Chief William McManus have been openly against SB 4 since it was first introduced to the legislature. “I am thankful that, for the meantime, we can focus our energy on our prime objectives of community policing, responding to calls for service and solving crimes,” said Chief McManus Wednesday.

In a statement, Gov. Abbott, a loud opponent to so-called “sanctuary city” policies long before SB 4 was introduced, said Garcia’s decision will be appealed “immediately.”

“Because of this ruling, gang members and dangerous criminals...will be set free to prey upon our communities,” he said. There has been little evidence to support this claim — in fact, multiple reports have revealed the the country’s lowest crime rates can be found in places with the highest immigration rates.

An appeal from the state could punt the case to the notoriously conservative Fifth Circuit Court of Appeals in New Orleans. But those representing the many plaintiffs appear ready for whatever lies ahead.

“We do not expect Gov. Abbott or Attorney General Ken Paxton to yield easily,’ said Terri Burke, executive director of the ACLU of Texas, one of the main groups challenging the law. “This fight isn’t over yet, so we call upon law enforcement, local officials, and supporters who have fought so hard to stop this law not to let up until SB4 is well and truly dead.”