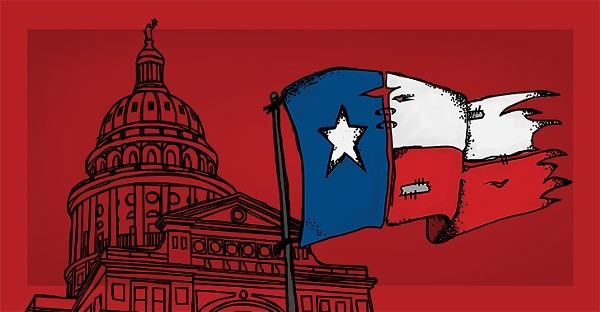 Although the Texas Legislature is only required to pass a budget during the five or so months they meet every two years, state lawmakers filed thousands of bills and resolutions during the last regular legislative session, managing to get over 1,000 of those signed by Governor Greg Abbott and turned into laws.

From the legalization of hunting feral hogs out of hot air balloons, to various measures aimed at protecting women reporting sexual assault on college campuses, to controversial bills that courts have halted before they have a chance to go into effect — this session had it all. On September 1, hundreds of these bills are set to go into effect.

Here are some of the new laws that will start being enforced Friday you may want to know about:

It’s no secret Texas has underserved foster children in the state’s care, and that issue took priority when lawmakers crafted House Bill 4, a Child Protective Services reform bill that provided extra funding to relatives or caregivers fostering children based on their family income. The law will make it easier for relatives and caregivers to be able to look after foster children as the state faces a CPS crisis, having to temporarily home an unusually high number of children in hotels or CPS offices this year.


But the legislature also passed a law allowing privately owned child welfare providers to deny services based on religious beliefs — under House Bill 3859, private foster organizations are allowed to refuse to place children with people who don’t align with the organization’s religious beliefs, whether it be because they are same-sex couples, a single parent, or part of a different religion. The controversial, “prejudicial law” inspired California Attorney General Xavier Becerra to ban state-sponsored travel to Texas.


Other new laws encompassing Texas children include House Bill 478, which allows a person to break into a stranger's car "by any means necessary" on a hot day if there is a child left inside — and not be punished for it as long as they called 911 first. There's also Senate Bill 179, which creates a criminal penalty for cyber bullying, and requires that school districts include cyberbullying in their existing bullying policies.


Although San Antonio already has a “Hands Free Ordinance” banning the use of cell phones while driving, it wasn’t until this year that Governor Abbott signed a statewide ban on texting and driving. Then, during the special session, lawmakers passed a second bill, Senate Bill 15, which preempted any local ordinances regarding cell phone use while driving, so the state’s cell phone laws would be uniform.


Although these two laws were effective immediately upon being signed by the governor in June, they are especially relevant now as the new school year kicks off: Senate Bill 968 and Senate Bill 969, both authored by state Senator Kirk Watson, aim to increase reporting of sexual assault on college campuses. SB 968 requires universities to include an online reporting option for anyone who wants to report sexual harassment, sexual assault, dating violence or stalking anonymously, or feels to intimidated to address their concerns to an administrator in person.

SB 969 protects students from disciplinary action regarding alcohol use if they are victims or witnesses of incidents involving sexual harassment, sexual assault, dating violence or stalking.


House Bill 4102 also seeks to help survivors of sexual assault: although it is not specific to college campuses, this new law authored by state Representative Victoria Neave creates an opportunity for people to donate money while renewing their driver’s licenses or registering their vehicles, in order for rape kits to be tested. The state has a backlog of 19,000 untested rape kits from before 2011.


Two of the more controversial bills of the session that drew out the largest crowds to testify at the Capitol, have now been placed on hold from being implemented on Sept. 1 by federal judges.


Senate Bill 4, the so-called "sanctuary cities" ban that would make it mandatory for local jails to comply with all ICE detainers, punish local law enforcement leaders who discourage their officers from inquiring about a person’s immigration status, and allow officers to ask a person being detained or arrested about their legal immigration status, was temporarily placed on hold on August 27. The hold will extend for the duration of a trial between Texas and several major cities and immigrant advocates across the state.


And less than 24 hours before Senate Bill 8 was set to be enforced, a federal judge temporarily blocked an anti-abortion law that would prohibit the safest, most common second-trimester abortion procedure. The 14-day-hold ends when Whole Woman’s Health, who is suing the state over SB 8, has a hearing in Austin to prove to a federal judge why the law should not be implemented. From there, the judge could decide to implement the law, or issue a preliminary injunction, which would halt the bill until the suit between WWH and Texas plays out.

Because open carry isn't enough, Texas has passed a law allowing Texans to carry a knife (defined as: a dagger, a Bowie knife, a sword or a spear) almost anywhere in Texas. Sword enthusiasts are barred from carrying their weapons in schools, polling centers, hospitals, and most religious locations.

Finally, in true Texas fashion, lawmakers decided the best way to address the state's feral hog infestation was to make it legal to hunt them out of hot air balloons. There are roughly 2 million wild hogs living across the state, causing approximately $50 million in damage each year — no doubt the new law will address the issue in a much-needed, reasonable manner.