Ten hours after the San Antonio City Council voted to remove the Confederate monument towering over Travis Park, the stoic soldier topping the looming obelisk was gone. By 4 a.m., the base of the monument and two adjoining cannons had also disappeared.

Police had begun guarding the fenced-off park as the 10-1 council vote came in, shortly before 2 p.m. — but the heavy machinery rolled into downtown San Antonio after nightfall. By 9 p.m, nearly 100 San Antonio Police Department officers gathered in the blocks surrounding the grassy park, prohibiting all vehicle and pedestrian traffic from getting too close.

"We planned for worse-case scenario, we didn't want to wind up like Charlottesville," explained SAPD Chief William McManus. "We want to make sure we're prepared, even if it means being over-prepared."

As news spread that the monument was coming down, supporters (and a few protesters) flocked to the police barricades surrounding the park to watch.

"A lot of people say it's not a big deal, they say a monument's not going to change anything," he told the Current Friday morning. "But what it represents to us, to our ancestors ... it's not just sign we're tip-toeing towards progress, it's sign that grassroots organizing works."

The biggest complaint from those opposing the council's Thursday vote — coming from pro-Confederacy group This is Texas Freedom Force and Councilman Clayton Perry (the only dissenting vote) — was that that Mayor Ron Nirenberg had been insensitive in timing the vote so soon, in the midst of Hurricane Harvey relief efforts. 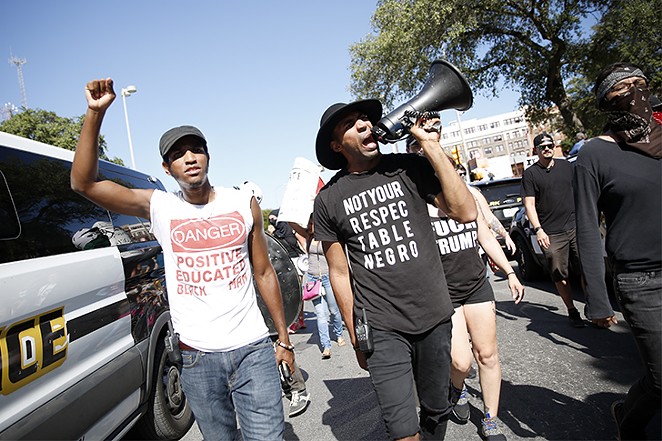 "There's people still dying in Houston," said Perry before the Thursday vote. "That's where our focus should be today. Not a statue."

Jones, a Houston native, whose neighborhood is one of the areas hit hardest by Hurricane Harvey flooding, doesn't understand this argument.

"It's a baseless copout to me. People will come up with anything to get out of a situation they don't want to face," he said. "For me, being from Houston, that just means I have to multitask. That heavy heart I have for Houston is the same heart I carry for of all these issues, and I would hope our council members could do the same."

He and other local activists see that kind of nuanced mind in Mayor Nirenberg, who has been keeping the city aggressively involved in hurricane relief work across the state since last week.

"I'm thankful to know a Mayor who is compassionate enough to serve the people & willing enough to take on tough challenges at same damn time," tweeted Lowe, after Nirenberg scheduled the council vote Monday.

On Thursday night, Chief McManus said he wasn't sure where the removed monument was going to be stored. The council proposal authorized the city to remove and store the monument before entering into a "donation agreement with a nonprofit involved in historic preservation or education" for the soldier statue and the two cannons. It's unknown when that discussion will begin.

Neither Councilmen Shaw or Treviño have spoken publicly following the statue's late-night removal — which doesn't come as a surprise. At the Thursday council meeting, Cruz noted that they had both been targets of extremely violent and threatening hate mail since announcing the proposal.

“Imagine in 2017 during this whole process getting emails that say, ‘Nigger, if you vote for this, we’ll get you,’” Shaw told the council Thursday, explaining why the vote needed to be expedited. “There’s no reason for a process, there’s no reason for a dialogue. I’m not putting any of my appointees through that. I’ll take that. We will take that together.”