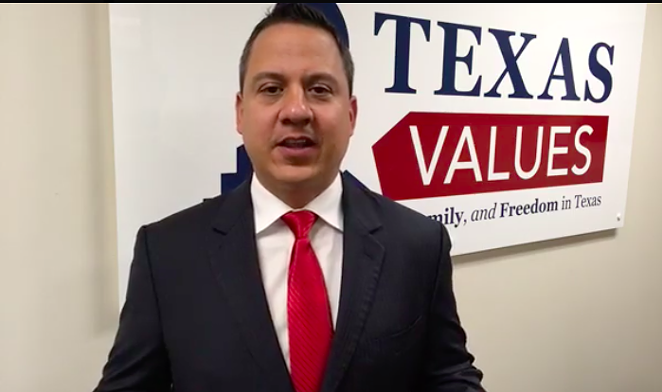 A group of religious conservatives are protesting a new San Antonio Independent School District ordinance that promises protection to LGBT students and employees from discrimination based on their sexual orientation, gender identity, and gender expression.

The addition to SAISD's non-discrimination ordinance, which was proposed by a SAISD student, was unanimously approved at the board's August meeting.

But the ordinances' opponents, led by Texas Values, an Austin right-wing lobbying group fresh from mourning the demise of the Texas Legislature's so-called "bathroom bill," say the district was wrong to pass the new rule without parental input. So they're headed to Monday night's SAISD board meeting to air their concerns.

"The parents weren't given consent, why were [they] shut out of the process?" said Texas Values president Jonathan Saenz at a Monday press conference announcing the group's beef.

Asked by a reporter how many of the 30 protesters holding the event were SAISD parents, two people tentatively raised their hands.

"But we're taxpayers!" one woman shouted.

Their argument, however, doesn't stop at parental rights. Most pointed to outdated, long-debunked theories claiming that transgender people are just mentally ill.

"Gender dysphoria is a mental condition," said Charles Flowers, a pastor at the local Faith Outreach Center. "A mental illness."

He went on to make the unusual and unscientific claim that transgender kids were a threat to students who've been sexually abused.

"We are a binary sex species. A person's belief that he or she are something they are not is, at best, a sign of confused thinking," said Allan Parker, president of the Justice Foundation, a far-right legal organization (with a misleading name.) "This is not something to be encouraged. We should treat these people with respect as people that have a disability. But we should not treat it like it's normal. It's not."

Aside from having no medical or scientific background, Parker has spent his career fighting against abortion access and women's rights in Texas (he was lead counsel for Norma McCorvey, or "Jane Roe" of Roe v. Wade fame). Known for comparing abortion and evolution to concentration camps, Parker likened the new SAISD rule to a government plot.

In reality, however, the updated non-discrimination ordinance was proposed by a group of SAISD students, simply concerned that their LGBT peers were being treated unfairly.

"It's a matter of protection and equal education for all," Ruby Polanco, a senior at the district's Young Women's Leadership Academy, told the SAISD board at its August 22 meeting. Polanco led the charge to update the ordinance, collecting over 300 signatures of students in favor of the change before the board gave their unanimous approval.

Leslie Price, spokeswoman for SAISD said the board won't be considering any change to the new ordinance at the board's 5:30 meeting.

Board members will, however, be voting on an resolution to expand protections of SAISD students who are enrolled in the Deferred Action for Childhood Arrivals (DACA) program that's currently under attack by the U.S. Department of Justice. A group of students, teachers, and advocates are holding a press conference before the meeting to speak on the issue — and plan on addressing the importance of the non-discrimination rule.