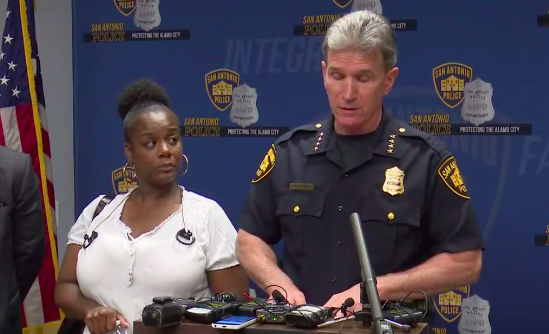 A three-day spike in gun violence on San Antonio's east side brought District 2 Councilman Cruz Shaw and San Antonio Police Chief William McManus together — yet again — to ask for the public's help.

San Antonio Police Department reported seven different shootings in the inner east side between Sunday and Tuesday which left nearly ten people injured — and one dead. In a press conference Wednesday morning, McManus said the motives are unknown in these multiple shootings, simply because no one will talk to inquiring officers.

"Neither the victims nor witnesses will give us any information," he told reporters at a Wednesday press conference.

Councilman Shaw urged anyone who knows anything about these shootings to call his office if they're afraid of retaliation for going to the police.

"I've been in this office less than a couple of months, and this is my second press conference regarding gun violence in our community," Shaw said, referring to the July shooting death of a 4-year-old boy. "Now, it's enough about words. It's about action. We need your help."

San Antonio has seen an alarming uptick in violent crime in recent years, enough for McManus and other local and state law enforcement to create a "violent crime task force" to figure out what's behind the spike.

In a March press conference, McManus told reporters he still is uncertain why San Antonio's violent crime rate has almost doubled in a year. "Neither criminologists, police chiefs, academics — nobody can identify specific reasons for an increase in crime," he said.

Adrianne House, the mother of one of the victims of the shooting spree, joined the two men at the press event. She reminded reporters that her largely African-American east side community is still wary of the police, especially when many well-documented police encounters have led to a person of color being shot.

"Law enforcement is not trusted in our communities," House said. "When you go twenty years without trusting the police, it's hard to start."

Maybe if cops build a genuine relationship with the neighborhoods — aside from one built around arrests — people would start reaching out, she said. House's son Edward, a college football player, remains in the hospital with serious injuries. He may not walk again, according to House.

Responsibility also lies in the families of the east side, she said, especially the families with a history of gang involvement.

"When you live in an environment and nobody is pushing you to do better every day, then you become a product of your environment," she said. "If we don't do something, we're going to lose our kids to the penitentiaries or to the graveyards."