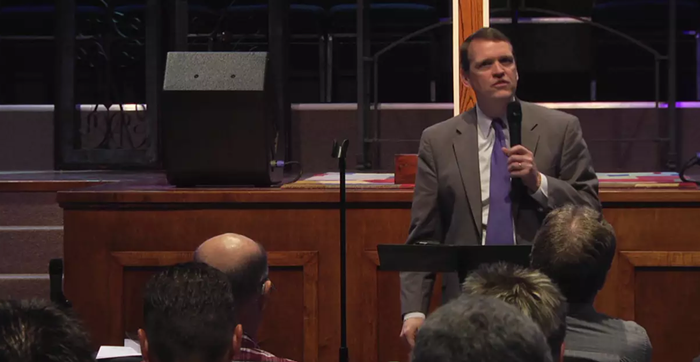 Transgender kids prove that "Satan's plan is working." Same-sex marriage is "disgusting," and shows that "we're going back to that time where debauchery rules." Oh — and gay marriage is essentially the same as "marrying a tree."

These are just a few of the bizarre and generally offensive things that Jeff Mateer, a man President Donald Trump wants to rule over a Texas federal court, has uttered during his career as a far-right legal activist.

Mateer shared these specific thoughts in a 2015 speech titled "The Church and Homosexuality," in a now-removed video obtained by CNN Wednesday. But civil rights lawyers and advocates were already concerned when Trump initially announced Mateer's nomination to the U.S. District Court for the Eastern District of Texas on September 7. That's because of Mateer's long history fighting for so-called "religious freedoms" — the right to ignore the separations between church and state in the U.S.

Up until last year, Mateer worked as general counsel for a Texas Christian advocacy group called First Liberty Institute, an organization whose legal accomplishments include keeping a statue of the Ten Commandments on the state Capitol grounds and protecting anti-abortion activist groups disguised as health clinics. First Liberty is currently representing the Oregon bakery owners headed to the Supreme Court for refusing to sell wedding cakes to same-sex couples.

In 2016, Texas Attorney General Ken Paxton brought Mateer into the public sector to work as first assistant attorney general, a decision that came with its own wave of opposition. “Jeff Mateer is a principled leader—a man of character," Paxton said in a news release after Mateer's nomination. Paxton has yet to comment on Mateer's character following CNN's release of his 2015 speech.

Kacsmaryk and Mateer were recommended to Trump by Texas Senators Ted Cruz and John Cornyn.

Since the Supreme Court legalized same-sex marriage in 2015, cases defending religious freedoms have become a staple of Texas federal courtrooms — whether it's the freedom to discriminate against gay spouses of city employees, or the freedom for doctors to refuse medical care to transgender patients or women who've had abortions. If the Senate Judiciary Committee approves Trump's two Texas nominations, it seems likely these kinds of cases will continue to take precedent.

Equality Texas seems to agree. In a press statement, the LGBT advocacy group wrote, “the president is using his office in an attempt to ensure policies will be created and spearheaded to advance anti-LGBTQ discrimination in employment, housing and places of business all under the guise of protecting religious liberties."

Hell, even the Church of Satan agrees. In a Wednesday tweet, the church denounced Mateer's claim that trans kids were part of "Satan's plan."

"Keep religion out of matters of law & order," the group posted. "Courts should disregard whatever [Mateer's] imaginary friends, above or below, tell him."