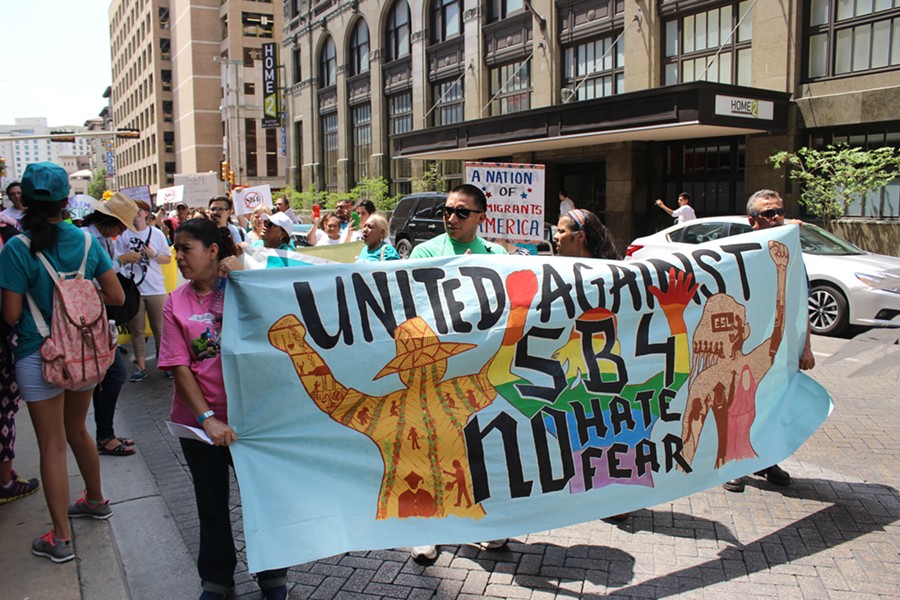 The last time opponents of Senate Bill 4 faced the state of Texas in federal court, they won. Or, at least, they convinced a federal judge to temporarily block the so-called "anti-sanctuary cities" law from going into effect on its September 1st start date.


On Friday morning, the two sides faced each other again — this time, in front of a panel of three judges in the Fifth Circuit Court of Appeals in New Orleans. State attorneys (including Attorney General Ken Paxton himself), alongside attorneys from the U.S. Department of Justice, argued SB 4 should be implemented immediately. Attorneys representing cities, counties and local officials opposed to the law stood by their argument that SB4 is unconstitutional and should remain blocked.


“Texas is basically saying that SB 4 … is consistent, permitted, and authorized in the federal scheme,” said Nina Perales, the lead attorney with the Mexican-American Legal Defense and Educational Fund, which represents several of the case plaintiffs, during a press conference following the Friday hearing. “It is our position that SB 4 conflicts with federal immigration law and violates individual people’s rights, whether it’s the right to be free from unconstitutional arrest, or the right to be able to speak out on public issues without penalty from the government.”

As signed into law, SB 4 would allow local law enforcement to question legally detained or arrested people about their immigration status, potentially land law enforcement leaders in jail or require them to pay a fine if they actively discourage their officers from asking about immigration status, and make all immigration detainer requests from Immigration and Customs Enforcement mandatory for local jails to comply with. Detainers, which are not mandatory to comply with, are requests from Immigration and Customs Enforcement to hold a person with unclear or undocumented legal status for 48 hours after they would have otherwise been released from jail, so that ICE can take them into custody. In 2015, honoring immigration detainers cost Texas county jails more than $60 million, according to the Texas Commission on Jail Standards.

The controversial immigration measure, dubbed a “show me your papers” law, passed through the Texas Legislature and was signed by Governor Greg Abbott earlier this year, despite numerous protests and overwhelming opposition from more than a thousand people who showed up to testify against the bill.

Back in August, U.S. District Judge Orlando Garcia temporarily blocked the law from being enacted, simultaneously ruling against major provisions of the bill: local jails would not be required to comply with all ICE detainers (Garcia determined this was a violation of the Fourth Amendment,) and law enforcement leaders could not be barred from implementing policies discouraging officers from asking about immigration.


Garcia did not rule against the provision of SB 4 that allows law enforcement to ask about immigration status — but he did stress that law enforcement officials are not allowed to detain people solely because of their status.


Paxton filed a motion to appeal Garcia’s ruling, and the the state presented its arguments to unblock SB 4 on Friday morning in front of the notoriously conservative appeals court.


“We delivered a strong case for allowing Senate Bill 4 to take effect, pending our appeal, because of the far-reaching public safety consequences of the lower court’s order,” Paxton said in a statement.


For now, all there is left to do is wait: The judges announced they would not be reaching a decision on the appeal on Friday, according to Perales. Meanwhile, arguments for Garcia’s preliminary injunction are scheduled to begin on November 6.


“The court asked very difficult questions of both sides. They were very engaged,” said Lee Gelernt, an American Civil Liberties Union lawyer representing plaintiffs, during a press conference. “We’ll have to wait and see what happens.”