There's A Chance Dwyane Wade Could Join the Spurs 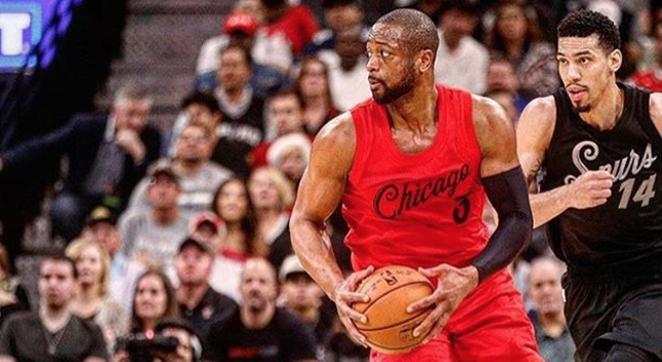 Dwyane Wade may have been one of the star players of the Miami Heat team that beat the San Antonio Spurs in the 2013 championship (yes, it still hurts), but that hasn't blacklisted him from possibly joining the Silver and Black team.

Yep, Wade, who most recently played with the Chicago Bulls, might don a Spurs jersey this season.

The Spurs are rumored to be on a short list of teams likely to acquire Wade before the start of the 2017-2018 season. ESPN reported that Wade and the Bulls came to a buyout agreement, though that has not yet been made official.

Among the short list of teams that Wade might be traded to also include the Cleveland Cavaliers, Oklahoma City Thunder and back to Miami Heat.

Lebron James, who we all know was part of that 2013 Miami Heat team, tried to recruit Wade to join him in Cleveland last year, but was unsuccessful due to the team's salary cap. Wade is also close to Carmelo Anthony, who was traded to Oklahoma City on Monday.

While speaking to the Associated Press Sunday night, Wade indicated his friendships with other players would not have a part in his decision.

"My decision is a pure basketball decision," he said. "I'll make the one that fits me best at this point in my career and with what I feel I have to offer a team that needs what I have to offer."