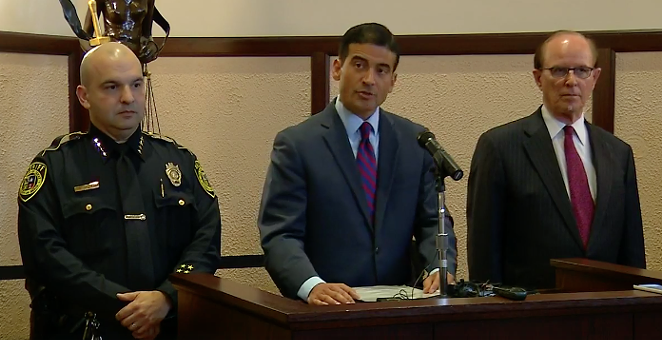 Bexar County is about to take a big step toward decriminalizing small-scale marijuana possession.

On Wednesday, Bexar County officials announced a new "cite and release" pilot program that could see less Bexar County residents in jail for nonviolent, low-level crimes, including the possession of less than four ounces of marijuana, and driving with an invalid license.


The program would let law enforcement treat non-violent, low-level crimes (including the possession of less than four ounces of weed) like a traffic violation. Instead of arresting people on the spot and sending them to jail for a misdemeanor, officers will have the option (on a case-by-case-basis) of issuing a citation with a court date and sending people on their way. Their names will stay out of the jail's booking system.

The program has been a long time coming: local law enforcement has had the discretion to cite, rather than arrest, certain misdemeanor offenders since 2007, when the Texas Legislature passed a law giving them that power. Bexar County Criminal District Attorney Nico LaHood has been mulling over the idea of a cite and release program since his first run for DA in 2010.


“I can honestly say, this is huge,” said Bexar County Sheriff Javier Salazar during a press conference Wednesday morning announcing the program.
“[Jail] is for the people that as a society, we’re afraid of, not for people we’re just mad at. That’s what the system has been allowed to become ... we’re locking up people who we’re simply mad at.”


Currently, Bexar County jails are “at capacity,” according to Salazar.


The program, which Bexar County Judge Nelson Wolff called a “major step forward” in the county's criminal justice system, has been in the works for almost two years. Bexar County officials came up with their version after reviewing similar programs in Harris and Travis Counties; Dallas City Council voted to approve a “cite and release” program earlier this year, too.


“This program will allow officers to stay on our streets and continue to protect our community, help prevent the overburdening of our criminal justice system, and at the same time, allow the citizen accused an opportunity to learn from a poor choice without having the stigma of an arrest follow them for the rest of their life,” LaHood said in the press conference.


Nonviolent crimes covered under the program included possession of less than four ounces of marijuana (not including synthetic marijuana, LaHood stressed); vandalism or property damage costing between $50 - $500 in damages; theft worth between $50 - $500; refusing to pay between $100- $750 for a service that has been completed (think hotels, restaurants, etc.); and driving with an invalid license.


The program is designed to help keep non-violent offenders out of jail— “the 18, 19 year old college kid that made a mistake that, quite honestly, thousands of kids every day make that same mistake,” as Salazar put it.

The program could have possibly helped keep DACA recipient Josue Romero out of jail —and out of ICE custody — if it had been in place when he was arrested for small-time marijuana possession in San Antonio back in February.


LaHood explained that when these nonviolent offenders would show up for court, they'd be are given the option to participate in community service and attend classes pertaining to their specific violations. If they follow through with the process within 90 days, their case will never be filed, and they can avoid going into the court docket system. They'll leave with a clean record.


“Someone that has just been arrested for these [misdemeanor] charges should not be in our jail without something else holding them,” LaHood said.


The program is expected to begin in the near future, though no specific date has been set.

LaHood expects it to be in place “long enough to see if it works or doesn’t work,” and said they would likely adjust the program as they see fit once they see how it’s doing in Bexar County.