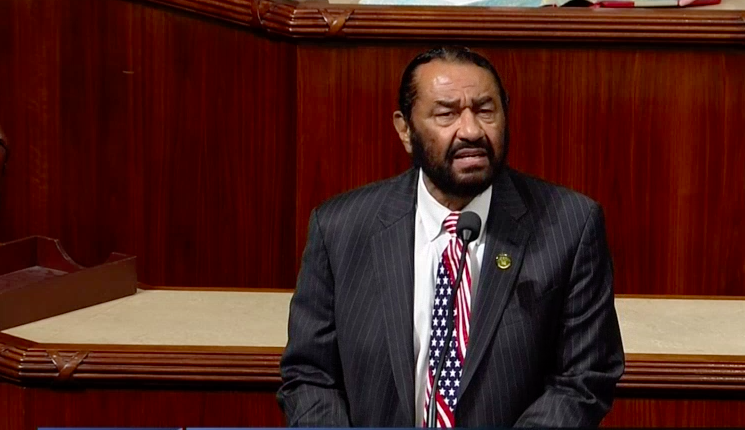 Houston Congressman Al Green has again called for the impeachment of President Donald Trump on the U.S. House floor. This time, however, the House will have to vote on it.

"There is one among us who seems to incite hatred, bigotry, and...discrimination," Green, a Democrat, said in his Wednesday address in the House.

Green rattled off a list of what he believes are impeachment-worth offenses: demeaning women with "stealthy sexism," disrespecting Puerto Ricans' needs in the wake of Hurricane Maria, blaming "both sides" for the fatal White Supremacist rally in Charlottesville, singling out Muslim Americans with a travel ban, attacking transgender members of the military with a trans ban, disrespecting football players and their mothers (remember when Trump called protesting athletes "sons of bitches"?), and completely fabricating a story about President Barack Obama wiretapping Trump Tower.

"President Donald John Trump is fueling an alt-right hate machine," Green said. “I rise today on behalf of the many who have concluded that enough is enough.”

Green was the first member of Congress to call for Trump's impeachment, which he did in May — a move that brought death threats to his office. By July, Green had co-sponsored the first article of impeachment against the new president.

What makes this recent declaration different is that Green introduced a "privileged resolution," a document declaring that something (or, in this case, someone) goes against the integrity of the House, meaning the resolution should take precedence over the day's regular order of business. It also triggers an automatic House vote.

Since the House, like the Senate, is majority Republican, it's unlikely Green's resolution will get enough votes to pass. He is the second Democrat to file articles of impeachment against Trump.