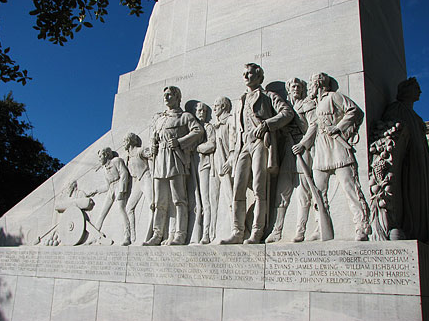 On October 15, hundreds of protesters gathered at the Alamo to protest yet another relocation of a monument — except this time, it wasn’t a Confederate one.

The Alamo Cenotaph, which has been at the front of the Alamo since 1940, is a memorial to “commemorate the men and women who chose to defend the Alamo rather than surrender, despite overwhelming odds,” according to the city’s website.

It was commissioned to mark the 100th anniversary of Texas' Independence from Mexico, and the phrase “In memory of the heroes who sacrificed their lives at the Alamo, March 1836, in the defense of Texas” is etched, along with names of many Alamo defenders, on the side of the 60-foot, Georgia marble and Texas granite sculpture. The word cenotaph means a "tomb or monument erected in honor of a person or group of persons whose remains are elsewhere."

Back in May, San Antonio City Council voted unanimously to approve a sweeping (and controversial) Alamo redesign plan, which included, among other things, a new museum, restoration of the Church and Long Barrack — and potentially relocating the cenotaph.

The city's thinking was to return the Alamo Plaza to its near-original state, before the infamous battle took place. City officials said that “preserving and protecting these structures and returning a sense of reverence and respect to the entire Alamo compound” was the motivation behind the plan.

Others are opposed to turning back the clock quite that far — and they're using the cenotaph's relocation to drive their point home.

“[City officials] all have said that they want to tell the whole story [of the Alamo.] A more enlightened history, a more inclusive history — and that’s not what the Alamo is about,” Brandon Burkhart, vice president of This Is Texas Freedom Force, told the Current. “The Alamo story has been told.”

TIFF, which is perhaps best known for protesting the removal of Confederate statues across Texas, joined other opposition groups Sunday in front of the cenotaph to protest the monument's pending removal.

It's unclear when and if the cenotaph would be moved, though the process would likely take a while since the city would have to go through several logistical hurdles (road closures, funding, total approval) before anything actually happens. For now, the city has "conceptually approved" a seven-year master plan for the entire redesign, and the cenotaph relocation will be reviewed by the Historic and Design Review Commission.

Lee Spencer White, the president of Alamo Defenders Descendants Association, told the Current she would protest the relocation of the cenotaph “until I take my last breath.”

White isn’t opposed to all aspects of the Alamo redesign — she is all for “telling the story in a grander manner,” and said the construction of a new museum is  essential. But she is opposed to relocating the cenotaph because to her, the memory of the defenders is just as “sacred" the Alamo mission itself. White is a direct descendant of Gordon C. Jennings, the oldest man to die at the Alamo. His name is on the cenotaph.

This article previously stated the city had approved a glass wall surrounding the area in their Alamo redesign plan. While the wall was proposed in earlier stages, it was not approved in the final plan. The article also stated the cenotaph would be relocated near Market street, but the cenotaph relocation has yet to be determined by the Historic and Design Review Commission. We regret the error.