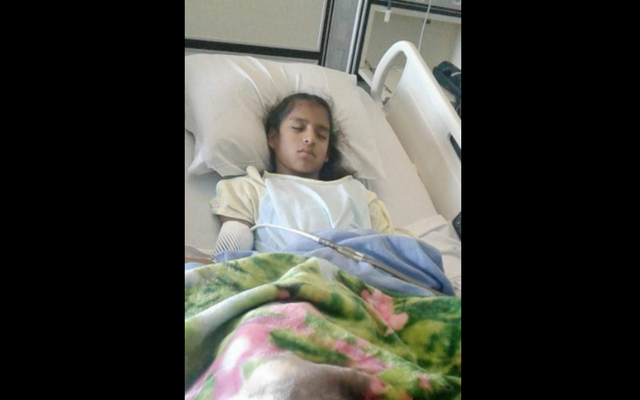 On Tuesday, 10-year-old Rosa Maria Hernandez was in an ambulance headed from Laredo to Corpus Christi, rushing to have emergency gallbladder surgery. But by Wednesday evening, instead of recovering back home in Laredo with her family, federal immigration agents took Rosa Maria, who has cerebral palsy, to a shelter for undocumented immigrant children in San Antonio, where she is awaiting deportation.

According to Leticia Gonzalez, the Hernandez family’s lawyer, the agents were directed to “keep the child in their line of sight.”

Cantu told Gonzales that agents followed Rosa Maria everywhere she went in the hospital — to studies, to her surgery, and to her hospital room where she was recovering. They stood outside and wouldn’t let her close the door to the room. Cantu said she wondered if they were breaking the law, and if she and her cousin were going to be taken into custody or incarcerated. In a Facebook video, Cantu said agents at the checkpoint had told her Rosa Maria would be deported after the surgery, and they asked if Rosa Maria had any family members in Mexico that could pick her up after she crossed the bridge from the U.S. to Mexico.
Rosa Maria was transported to the shelter in San Antonio by Border Patrol agents on Wednesday, where she is currently being held.

According to Gonzalez, agents said family could visit Rosa Maria, but would be unable to take her home while she was being processed for deportation. Gonzalez said agents told her they would expedite the process, but they refused to give her a specific time frame for how long Rosa Maria would be at the shelter. Once Rosa Maria's family realized they would be unable to take her home, they all cried.

“[Rosa Maria] has cerebral palsy. She really has the mentality of a child who is closer to four or five years old,” Gonzalez explained. “In speaking with the child, you immediately see that there are some developmental delays, and that the child has difficulty understanding what exactly is taking place.”

Rosa Maria's mother, Felipa de la Cruz, says her daughter doesn’t understand what is going on. Her mother told Rosa Maria she was there to recover, and that once she did, she would be able to come home — although there is no guarantee that will happen.

De la Cruz is still in Laredo. She has not been with Rosa Maria since before she left in the ambulance to Corpus Christi, and has only spoken to her on the phone or through video calls. De la Cruz had asked Cantu to go with Rosa Maria to the hospital because she and her husband are also undocumented, and they were fearful of crossing the checkpoint.

“I’m more at ease because I’ve been able to see her through a video call, I’ve talked to her, and she tells me she’s ok,” de la Cruz said in Spanish during the phone conference. “But I still feel terrible, because I want her here with me so I could be taking care of her after her surgery.”

It's Rosa Maria's cerebral palsy that inspired de la Cruz to move to the United States in the first place.

“We came in 2007 because [in Mexico] we didn’t have the resources to help [Rosa Maria] get ahead, and my husband said maybe they’d be able to help us over here,” de la Cruz said. “So I brought her when she was three months old.”

Rosa Maria's case has garnered national attention — the Workers Defense Project has gathered 9,000 signatures for a petition to release Rosa Maria, and Congressman Joaquin Castro joined the Thursday press call to speak out against immigration officials' decision to detain her.

“It’s stunning that federal agents, would be waiting outside the hospital room of a ten-year-old girl with cerebral palsy. They’re treating her like a hardened convict who’s been taken to the hospital for treatment,” said Castro. “ICE has the discretion to release Rosa Maria at any time, and they’re choosing not to do so... Instead of using resources to protect communities, ICE is detaining a 10-year-old girl who is very ill.” 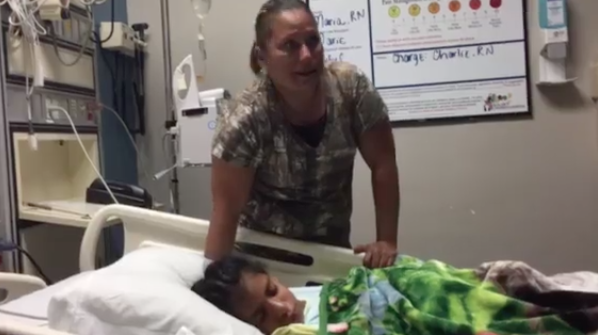 The case has also highlighted the contrast between the current and previous administrations when prioritizing undocumented individuals for deportation, and how immigration officials have disregarded "sensitive locations."

The Immigrations and Customs Enforcement directive that discourages agents from going into "sensitive locations," like schools, hospitals and places of worship, remains in place. But similar cases of immigration agents ignoring these directives have surfaced this year — in September, the undocumented parents of a two-month-old boy faced a similar situation, when they were allowed to cross the checkpoint to Corpus by Border Patrol agents if they agreed to be arrested and placed in deportation proceedings after their son's surgery, according to NPR.

Rosa Maria’s surgeon recommended she be released and sent to family members and people familiar with her medical and psychological needs, according to Gonzalez. Two of Rosa Maria’s family members with legal status — her cousin and her grandfather, who has been a legal permanent resident for 45 years— had offered to sponsor Rosa Maria.

But this didn't stop the immigration agents who took Rosa Maria into custody, Gonzalez said. Agents told the family it's possible that Rosa Maria could be released to her family — if she was taken to the San Antonio shelter first, according to Gonzalez. So her family complied, hoping this would help get Rosa Maria home.

In a statement from Border Patrol, a spokesperson indicated Rosa Maria would be processed for deportation.

"Due to the juvenile's medical condition, Border Patrol agents escorted her and her cousin to a Corpus Christi hospital where she could receive appropriate medical care. Per the immigration laws of the United States, once medically cleared she will be processed accordingly," a Border Patrol spokesman said in a statement.