This San Antonio Child's "It" Costume is Equally Cute and Creepy

While most pre-schoolers go the basic superhero or Disney princess route for Halloween, one San Antonio kid chose to fit the mood of the season and show how up-to-date he is with pop culture.

Yep, he dressed up as Pennywise the Clown aka "It."

Emmett Negrete, who is four years old, saw a glimpse of monster of the year on a YouTube video and decided he wanted to dress up as the clown for Halloween. 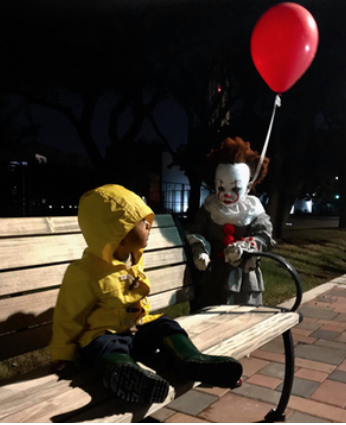 Darlene Chavez, Emmett's mother, told mySA.com that she was unable to find an It costume in her son's size and decided to make it herself. Because she put so much work into his costume, she decided to enter her son into local costume contests, and won one at Wonderland of The Americas Mall.

"He loves it, he's been dressing as It since we made it in September," she said.

What do you think of Emmett's costume? Do you vote cute or creepy? Or both?! Let us know in the comments!