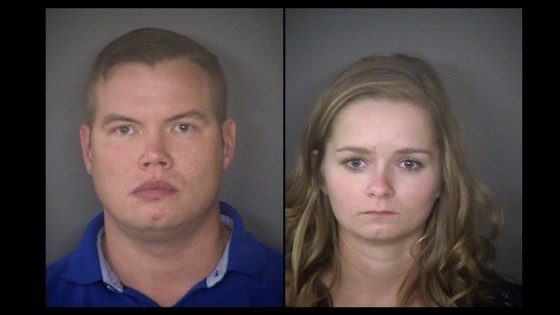 A Converse couple was arrested Monday for allegedly violently abusing two children in their care. According to Bexar County arrest warrants, the two adults had forced the children (girls, ages 5 and 10) to brush their teeth with cat poop and wear a dog shock collar — and riddled their bodies with bruises and cuts.

James Chalkley, 32, and Cheyanne Chalkley, 22, have been married for a little over a year, according to James' Facebook page. It appears both children are from James' prior marriage — neither of them are biologically related to Cheyanne. According to divorce records, James is the sole conservator — or, has sole custody — of the children. He is a member of the U.S. Armed Forces.

James and Cheyanne have each been charged with two counts of injury to a child for allegedly abusing both children (one of James' charges came on Oct. 5).

According to the Oct. 30 warrant, both children and their 3-year-old younger brother (who's not listed as a victim) were removed from the Chalkley residence on September 19 and placed in a foster home — shortly after a school employee alerted Child Protective Services to the cuts and bruises on the youngest girl.

In interviews, the girls told Bexar County investigators that they were regularly hit by a belt, hands, and a thorny lemon tree branch. The younger girl said both adults would "take turns" spanking her, and her father had occasionally used a shock collar for a dog on her arms, legs, and back. She said the electric shocks had turned her skin green.

The warrant mentions that the older child told her new foster mother that once, when James asked Cheyanne if he was "too hard" on the kids, Cheyanne responded by saying "if they were her children, she would hit them more." She also said her father once held her head in the toilet and flushed — and then did the same to her younger sister.

Both girls told their foster mother that once, after James found cat poop in a closet, he had smeared the cat's "wet diarrhea" on their faces. He made his youngest daughter eat the feces. He also brushed her teeth with the cat poop "so hard he caused her to bleed," the warrant reads.