Russian Trolls Organized Both Sides of an Islam Protest in Texas 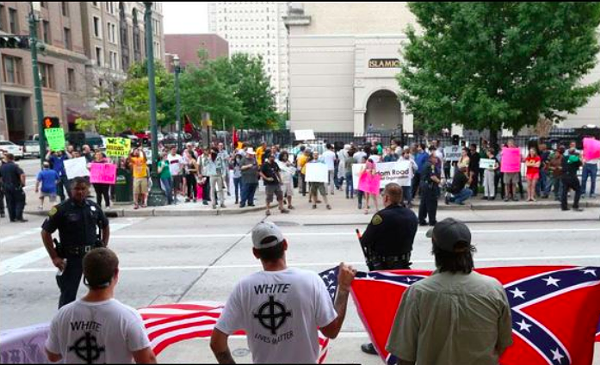 Update: Nov. 3 — Houston counter-protesters are alleging that their protest was not connected to the Russian-led group. The story now reflects those changes.

It appears some Texans have quite literally become the puppets of Russia.

On May 21, two agitated groups of protesters met in from of the Islamic Da'wah Center in Houston. One group, wearing "White Lives Matter" shirts, came to oppose the opening of a new library in the religious center (falsely led to believe it was publicly funded). The other group, waving signs reading "Muslims are welcome here," showed up to support the center and the community it served. The energized clash of protesters was not physically violent, but Houston police showed up to make sure it stayed that way.

Unbeknownst to everyone involved, both rallies were organized by a group of distant internet trolls located in St. Petersburg, Russia.

The coordinators of these two Facebook events were two seemingly polarized Facebook groups — one called the "Heart of Texas" with 250,000 likes, and the other titled “United Muslims of America" with 320,000 likes. But a federal investigation into Russia's influence on the 2016 election has linked both accounts to the same St. Petersburg troll hub.

"What neither side could have known was that Russian trolls were encouraging both sides to battle in the streets and create division between real Americans,"said U.S. Senator Richard Burr, chairman of the Senate Intelligence Committee, in a Wednesday hearing on Capitol Hill.

Burr said the Russian government spent a grand total of $200 to advertise these dueling events on Facebook. Then, it seems, they let social media do the rest. News stories about the May protest noted that the "Heart of Texas" organizers never showed up — and that local Islamic groups weren't involved in the counter-protest. Now we know why.

"It’s hard to attend an event in Houston, Texas, when you’re trolling from a site in St. Pete, Russia," Burr said.

Some Houstonians object to Burr’s allegations, claiming that the main counter-protest was organized by actual Houston residents concerned about the anti-Islam rally. “We had a legitimate counter protest and civil rights concern,” wrote protester Chris Martin in an email to the Current. “The counter-protest was in no way shape or form initiated, promoted, or controlled by Russian operatives…I personally know many of the counter-protest organizers.”

Martin never saw the event posted by United Muslims of America — he said he was drawn to the protest after a friend shared a different event invite with him, one made by an actual Houstonian (that had the same name as UMA’s event and took place in the same location at the same time).

Lawmakers on Capitol Hill have already verified that Russian government-funded groups spent at least $100,000 on political Facebook ads preceding the presidential election. If $200 can buy you a orchestrated clash on the streets of a city thousands of miles away, imagine what they could have done with the rest.