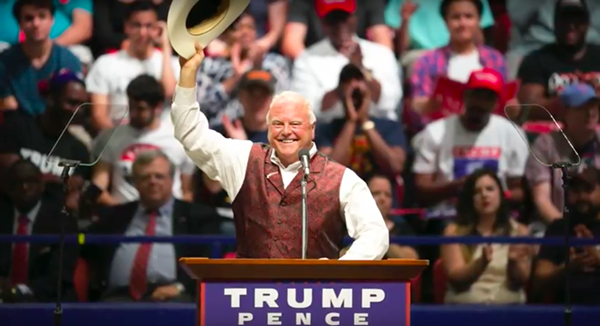 On Sunday, a "joke of the day" appeared on Texas Agricultural Commissioner Sid Miller's Facebook page that managed to offend both Pakistanis and people living with a mental illness. Now, Miller's team is claiming the elected official had nothing to do with posting it.

The "joke" which was deleted later in the day, read: "My friend was so depressed last night thinking about the economy, wars, jobs, his savings, Social Security, retirement funds, etc., he decided to call the Suicide Lifeline. He got a call center in Pakistan, and when he told them he was suicidal, they got all excited and asked if he could drive a truck."

Spokesman Todd Smith told the Austin American-Statesman that Miller, who is running for re-election, did not publish the post himself — it was instead posted by a "campaign team member."

"You can tell which are posted by Commissioner Miller because they include commentary written in first person," Smith wrote in an email. "The post in question was put up without the content being reviewed."

After first claiming the account had been hacked, Miller told reporters that the tweet came from a campaign staffer who had "inadvertently retweeted a tweet that they were not aware contained a derogatory term."

It's going to be harder to excuse the explicitly offensive Facebook post, however, on a sloppy staffer's retweet.

Smith told the Statesman that Miller knows someone who recently lost their son to suicide and believes its "no laughing matter." But he did not address or apologize for the blatant racism tucked into the joke.

What'll those crazy campaign staffers think of next?