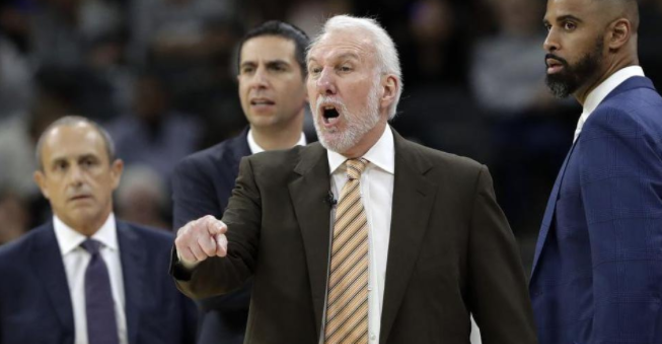 Coach Pop has never been one to stay quiet, at least not during a game (or when ripping President Trump to shreds). So it's probably not any surprise to any Spurs fan to learn that Popovich was ejected from Thursday evening's game.

Fans anticipated the game in the days leading up to the match up against the Golden State Warriors, not because the California team won the 2017 NBA championship, or even because the team swept the Spurs in the Western Conference finals. But because of Zaza Pachulia's dirty play on Kawhi Leonard in Game 1.

Tensions were probably already high since Popovich was protective of Leonard following the play that forced his star player to sit out the rest of the game.

Regardless, the shift in the second half of the game when the Warriors took the lead caused Popovich to get two technical fouls before being ejected from the game. With only a few minutes left in the game, the Spurs coach yelled "f*cking terrible ref" at one of the referees.

Oh, and he got a standing ovation while being escorted off the court. God bless you, Pop.