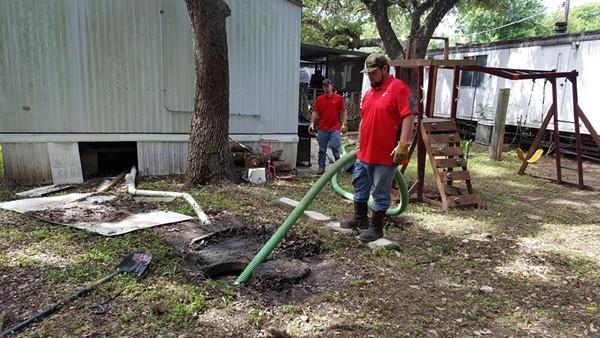 It's been over a year since city staffers discovered several septic tanks leaking raw sewage straight into the soil of a Northwest Side mobile home park. It appeared tenants of the 64-unit Oak Hollow Mobile Home park — mostly families — had been living with the smell for months, if not years. And it also appeared that the tenants' landlord, Joseph Mangione, had no intention of fixing it. Mangione instead saw the city's intervention as an excuse to evict all tenants and sell the property.

In a tangle of emergency tenant meetings and multi-agency coordination, the office of then-District 8 Councilman Ron Nirenberg was able to cobble together a fix to rehouse the displaced, disrespected tenants on the city's dime.

"Our concern was two-fold: First we made sure the residents were living in a safe place where their kids could keep attending the same school," said Nirenberg, who's since been elected mayor. "And then we threw the book at the slumlord."

On Thursday, a grand jury indicted San Man, Inc., Mangione's business, for knowingly dumping raw sewage "into or adjacent to water in the State of Texas, which threatened to cause water pollution." According to the indictment, this criminal act began in April 2014 and continued until November 2016. In a press release, the city said this type of charge is "significant" because property owners are rarely held accountable for environmental issues on their land.

If convicted on the felony charge, Mangione could face a fine up to $250,000. He'll also have to financially compensate the city for the cost of moving and housing his former tenants.

A few tenants still live on Mangione's property in units the city deemed to be livable last year. The indictment, however, is the final nail in the coffin. The park is officially shutting down and the city's offering up to $4,500 in relocation fees for each remaining tenant.

"This is about a mobile home millionaire that has let property go into decay to the point that government has to force compliance," Nirenberg told the Current a year ago.

Back then, the city's hands were often tied when it came to holding negligent landlords accountable. But now that he's mayor, Nirenberg's able to rewrite the book. That means improving the inspection process of these kind of mobile home parks (and any rented space, really), and actually enforcing some of the standards the city already has in place. Mangione's indictment comes as a warning shot to other maintenance-dodging property owners.

"For me, this is an opportunity to proactively show that if you are going to do business in the City of San Antonio and your business is to provide shelter for people, we are going to hold you to certain expectations," Nirenberg said.