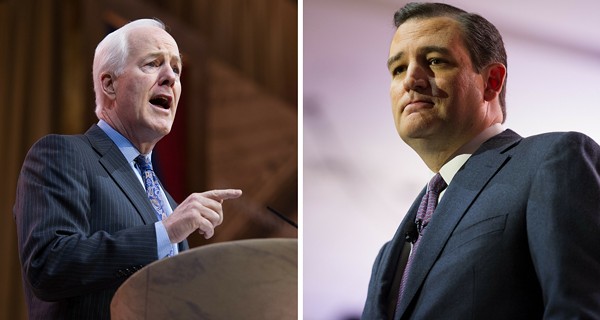 "These are serious and troubling allegations," Cruz said in a Thursday statement. "If they are true, Judge Moore should immediately withdraw. However, we need to know the truth, and Judge Moore has the right to respond to these accusations."

"I think people are trying to sort it out and figure out what the appropriate response is," Cornyn said Thursday, according to the Texas Tribune. "If it is true...I don't think this candidacy is sustainable, but we believe in a presumption of innocence until proven guilty, and so I think it's important for the facts to come out."

But neither Senator dropped their endorsement of Moore, who's hoping to fill the seat vacated by Attorney General Jeff Sessions.

In a Washington Post investigation, a woman accused Moore of sexually assaulting her in a car nearly 40 years ago — when he was 32 years old and she was 14. Three other women told the Post that Moore romantically pursued them around the same time period, when they were between the ages of 16 and 18.

Cornyn and Cruz have joined many Senate Republicans in condemning the allegations and suggesting that, if the facts check out, Moore should step down from the race.

Moore, who has outright denied the claims, has shown no intention of stepping out of the race.