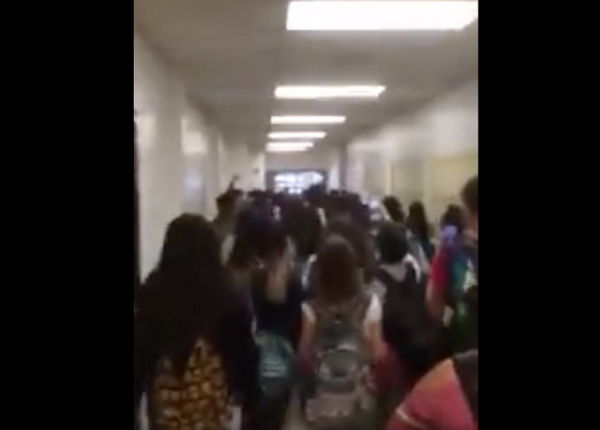 A teacher at Fulmore Middle School in South Austin has been placed on administrative leave after dozens of students staged a walk-out protest because she allegedly told a student to "go back to Mexico."


In a video posted on Twitter, dozens of students can be seen walking down a school hallway, chanting "Say it loud, say it clear, immigrants are welcome here!"

Fulmore Principal Lisa A. Bush said in a letter to parents that the teacher had made a "insensitive statement to a student," though Bush didn't specify what the comment was.

Several students told the Austin American-Statesman they were protesting on Nov. 15 because a teacher had told a Spanish-speaking student to "go back to Mexico" two weeks prior, and they didn't think administrators had done enough to address the incident. The protest lasted approximately 40 minutes.

"Comments such as that are not tolerated at any level, and appropriate actions were taken," Bush said in the letter.

They’re walking the halls, chanting “Say it loud. Say it clear. Refugees are welcome here!”
(Video sent to me by niece, a student there) pic.twitter.com/WwHWn5b2bh