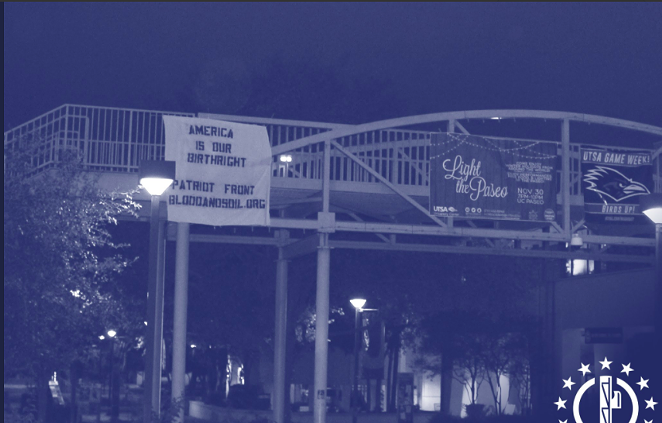 A white nationalist group targeted the University of Texas at San Antonio last week by draping a white banner reading "America is our Birthright" over a pedestrian footbridge on the school's main campus.

According to UTSA officials, the banner went up late Tuesday, Nov. 14 or early Wednesday, Nov. 15 and was taken down by staff around 7:15 the morning of the 15th, before most students arrived on campus. A Twitter post by white nationalist group Patriot Front, the alleged group behind the banner, shared photos of two banners that were hanging at UTSA, but school officials say the second photo was not taken on campus. In a Sunday press statement, the university quickly distanced itself from the act.

"There is no reason whatsoever to suggest our students were involved in the UTSA incident," it read. "UTSA students are very proud to be at a university whose principles and values are based on inclusion, diversity, tolerance and respect."

Patriot Front's Twitter feed shows previous flyering and banner-hanging on other Texas college campuses, including San Antonio's Northwest Vista College in early November and Texas State University in October. And it's certainly not the first time white nationalist groups have hit up Texas colleges with racist and anti-immigrant propaganda.

Texas State was hit particularly hard by these kind of flyers in the months after the 2016 Presidential election. By March 2017, Texas colleges were ranked #1 for having the most hate group recruitment efforts in the country. Up until now, most of these posters are linked to the Daily Stormer, a neo-Nazi blog that, after being shut down by several domains, has been moved to the dark web.