Police Find Couple Dead from Murder-Suicide in North Side Home 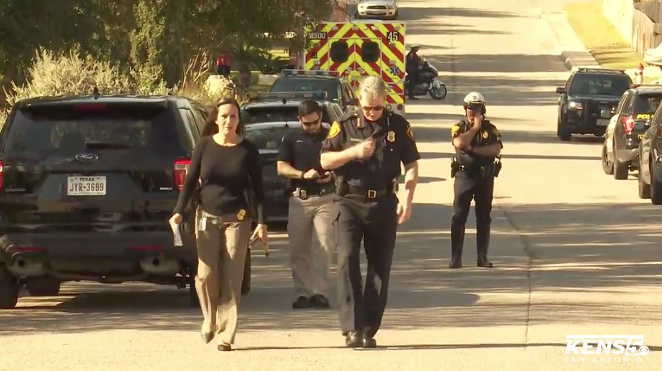 Police officers found a man and woman dead in their North Side home Monday from a murder-suicide, after the man had called police and threatened to hurt himself and his wife, according to San Antonio Police Chief William McManus.

"Officers arrived on the scene, shortly thereafter, they heard a gunshot, and not long after they heard a second. Officers went into the premises and they found him and the woman both dead upstairs," McManus said.

A SWAT team, several police units and a helicopter responded to the scene around 11 a.m. Monday, after the unidentified man had called 911 and threatened to hurt himself and his wife. For the first few hours of the stand-off, it was unclear if the man was alone in the home on Possum Tree Rd., or if his wife was also inside. Police were unable to get in contact with the man while he was inside the home.

Initial reports stated the man was holed up in the home with "several weapons," but McManus said there was just one handgun found in the home, the alleged weapon used.

SAPD had not been called to the home for domestic issues in the past, according to McManus.

"We had no sign in the past that this was imminent other than the phone call this morning," McManus said.

McManus said he believed the couple was estranged. They had three young children who were in school at the time, and no one else was in the house, according to McManus, who said the children would be placed in the care of family members.