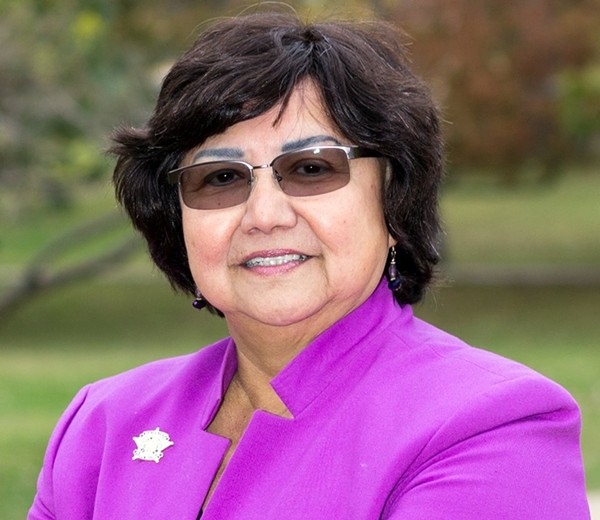 Valdez, a Democrat and an Army veteran, hails from a family of farm workers, and graduated from San Antonio's own Thomas Jefferson High School. Valdez officially filed to run today, although rumors of her resigning as sheriff in order to run for governor began swirling last week after Dallas County's Democratic Chair prematurely confirmed her resignation.

“Like so many hardworking Texans, I know it’s tough deciding between buying food, finding a decent place to live, and setting aside money for college tuition. Opportunity in Texas ought to be as big as this great state, but it is out of reach for far too many, that’s why I’m running for Texas Governor,” Valdez said in a press release. “I’m a proud Texas Democrat. I believe good government can make people’s lives better, and I intend to do just that.”

During her 12 years as Dallas County's sheriff, Valdez has taken pride in reforming the department she said was “known for the good ol’ boy system.” She’s been re-elected three times, spoken at both the Texas Democratic Convention and the Democratic National Convention, and has clashed with current Gov. Greg Abbott on immigration policies. Valdez strongly opposed Senate Bill 4, the anti-sanctuary cities law that passed during the most recent legislative session and is currently being challenged in court.

Valdez's announcement comes five days before the primary filing deadline. She's the only Democratic candidate that is currently an elected official, and is the most well-known of the seven Democratic challengers Abbott is facing so far. Andrew White, the son of former Texas Governor Mark White, is expected to announce his candidacy on Thursday. Valdez and White will likely become the frontrunners for the Democratic primary.

Abbott will likely breeze through the GOP primary, since the race for Republicans is far less crowded. His only opponent in the primary thus far is Larry SECEDE Kilgore, a little-known man from Amarillo who is so passionate about Texas seceding, he legally changed his middle name to the all-caps SECEDE in 2012.

"Texas is not a red state. It's a non-voting state," Valdez said during the press conference after she filed for office. "We need to let the people know that we're here. And Texans — the common, everyday Texans — need to hear our voice, and we need to hear their voice. Abbott may have the money, we're gonna have the people."

The primary runoff election will take place on May 22, 2018.