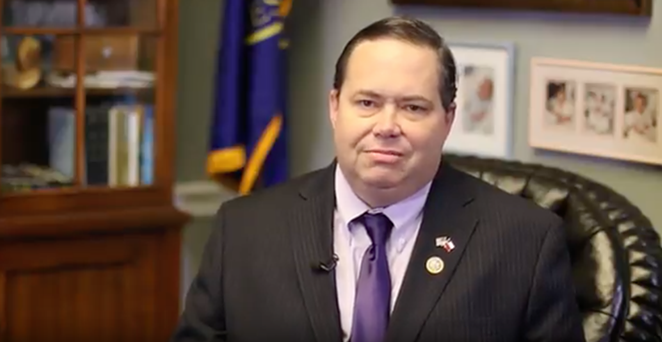 “On any given week you were prone to either ridicule, rude comments, acts of aggression or rage.”

That's how one former aide to Texas Congressman Blake Farenthold described her time in his D.C. office to the New York Times Monday. She, along with another former communications staffer, have come forward with new accusations against the Corpus Christi lawmaker, illustrating a work environment saturated with sexual harassment, gender discrimination and general hostility.

Their testimony follows more detailed allegations from former staffer Lauren Greene, who sued his office in 2014. She alleged Farenthold told her he had "wet dreams" about her, often gabbed about his sex life with his wife and once joked that she had a semen stain on her clothing in the office. While these claims have been public knowledge since the 2014 lawsuit, the case resurfaced last week after a U.S. House investigation discovered Farenthold had used $84,000 of taxpayer's dollars to settle the case.

And now, more women are coming forward to clarify that Greene's complaints didn't happen in a vacuum.

Interviews with recent staffers show that Greene's lawsuit did little to change the office environment. "[Farenthold] allowed the hostility in his office to continue," said former communications staffer Elizabeth Peace in an interview with the Houston Chronicle. "He allowed us to work in a place that was just emotionally damaging, and that should never be allowed in any office."

Peace and the unnamed former aide say Farenthold didn't only perpetuate an office culture built on pick-up lines and explicit jokes, but he had problems controlling his anger. He would often knock items off staffers' desks when he was upset or threaten to fire them, according to anecdotes shared with the Times. The unnamed aide also accused Farenthold's chief of staff, Bob Haueter, of treating women employees "differently" than men.

A spokeswoman for Farenthold, Stacey Daniels, confirmed that after two complaints in 2016 about the office's hostile, sexualized workplace environment, the congressman asked for an independent investigation into his office. That investigation found no evidence of "inappropriate sexualized comments" or "gender bias," according to Daniels.

Unfortunately, Farenthold doesn't have the best public record to back up these findings. This is the same congressman that had registered the URL "blow-me.org" in 1999 and in 2016, told an MSNBC reporter he supported then-candidate Donald Trump despite his "grab 'em by the pussy" comments, and that he might even support a candidate who enjoys "raping women."

In January, Farenthold pushed House Republicans to gut the nonpartisan ethics office and replace it with members of Congress because he "didn't like" the way the office handled his sexual harassment lawsuit in 2014. And then there's that photo of him in footie pajamas standing next to a hired lingerie model at some Texas Republican fundraiser in 2009.

On Friday, Farenthold told reporters he is "doing his best" and promised to repay taxpayers for the settlement cost.