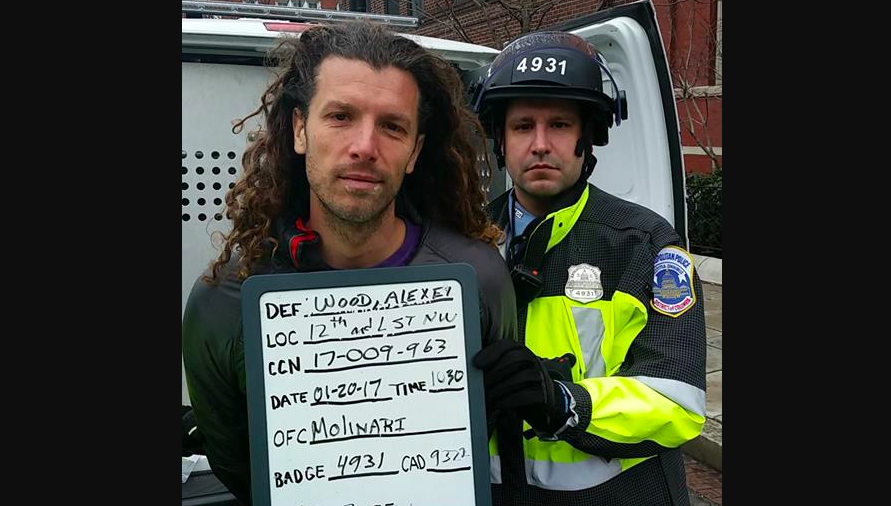 A federal judge has dropped the "inciting a riot" felony charge for all six defendants in the first trial against those arrested during Inauguration Day protests in Washington, D.C. One of those six defendants is Alexei Wood, a San Antonio photojournalist who documented the January 20 (or, J20) protest via livestream video.

Wood's 42-minute Facebook video was one of the main pieces of evidence used to convince D.C. Superior Court Judge Lynn Leibovitz to drop the incitement charge against the first six J20 defendants in court Wednesday.

"It's huge," Wood told the Current during a court recess Wednesday. "It could change everything for my case."

Wood was arrested in January along with nearly 200 other journalists, protesters, and bystanders who were indiscriminately rounded up and arrested after the protest turned violent. He was charged with six felony charges (the "inciting a riot" charge and five counts of destruction of property) and two misdemeanor counts of rioting and conspiracy to riot.

Wood said that the incitement charge was the one he was most worried about. In his livestream, Wood can be heard yelling "Whoo!" while showing protesters breaking things. To the prosecution, these actions were enough to be riot-inciting. But Judge Leibovitz disagreed.

"I didn't direct anyone to destruct property or start a riot, there was no criminal intent," Wood said. "This sets the precedent that expression of enthusiasm isn't a criminal offense, that it's first amendment-protected behavior."

He said the livestream evidence likely made him "the most vulnerable to incitement charges out of all the 187 defendants."

According to Ryan J. Reilly, who's been covering the trial for the Huffington Post, the U.S. attorneys are treating the defendants the same way. Instead of looking at each defendant's case individually, attorneys are slapping everyone the same charges — making each defendant responsible for any criminal actions taken by others who happened to be arrested in the same sweep.

"The prosecution is not accusing any of us [six defendants] of property destruction individually — we're charged with aiding and abetting the people that did," Wood said.

It's a strategy Judge Leibovitz also doesn't seem to agree with. She dropped the indictment charge because she found no evidence that Wood or the five individuals on trial planned the protest. It's a judgement that will certainly affect the cases of the other 181 individuals awaiting trial.

Wood expects closing arguments to begin Thursday — and said he wouldn't be surprised if the jury began deliberations later that day.