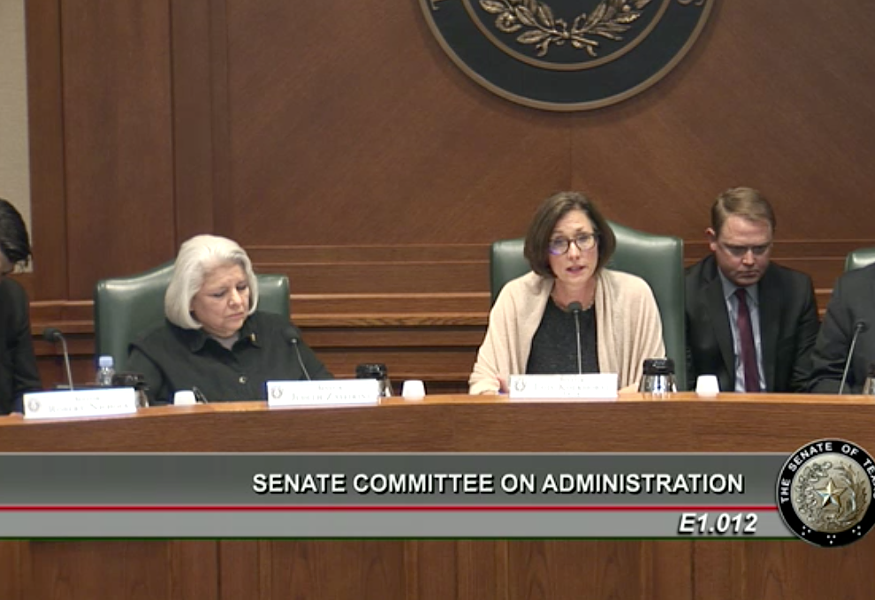 The Texas Senate's Committee on Administration met Thursday morning to review the chamber's sexual harassment policy — which hasn't changed in over 20 years. The hearing took place exactly a week after two Senate colleagues, senators Carlos Uresti and Borris Miles, were accused of overt sexual harassment.

"This is a human resources issue, but it is also a human respect issue," said committee chair Sen. Lois Kolkhurst, a Brenham Republican.

Committee members peppered Secretary of the Senate Patsy Spaw and Senate Human Resources Director Delicia Sams with questions about the chamber's current policy. Senators were particularly interested in understanding why no one has reported sexual harassment to Senate administration since 2001, despite multiple former staffers reporting their harassment by Texas Senators to various media outlets within the past months. No one mentioned the newly accused senators by name in the Thursday meeting.

"I'm troubled that women would feel more comfortable going to the press than to us," said Sen. Sylvia Garcia, a Houston Democrat, who doesn't sit on the committee but joined the hearing Thursday. "We need to develop a system that ... creates an atmosphere where women can go to us without retaliation or fear they will be further victimized."

Under the current Senate harassment policy, penned in 1995, Texas senators aren't legally required to take sexual harassment training — but are offered to voluntarily take it every two years. Spaw offered few suggestions as to how to improve the program.

"I think making the training more visible, talking about it more [will help]," she said. "But I think you all are doing exactly what is going to help right now. You are publicly giving support ... that helps me a lot."

Spaw explained that the policy covers all staff on payroll, meaning unpaid interns, lobbyists, journalists, and general members of the public visiting the Senate are not necessarily protected from sexual harassment.

Sen. Judith Zaffirini, a Laredo Democrat, said that these types of non-employees "should have an avenue to recourse" to report sexual harassment, too. A start: giving all interns a handbook with information about reporting abuse.

The Texas House of Representatives has already held a hearing to reevaluate its own sexual harassment policy — which is completely different than the Senate's. After a similar hearing, the House adopted an updated policy on December 1, one that actually defines what sexual harassment is, requires all employees and interns to complete a harassment training program, and offers outlets for victims to find counseling. Like the Senate, House administration can't force representatives to take harassment training.

Sen. Kolkhurst said she plans on relaying the new information gathered at the Senate hearing to Texas Lieutenant General Dan Patrick, who originally tasked her with investigating the policy.