San Antonio Has Seen Some Weird Car Accidents This Week 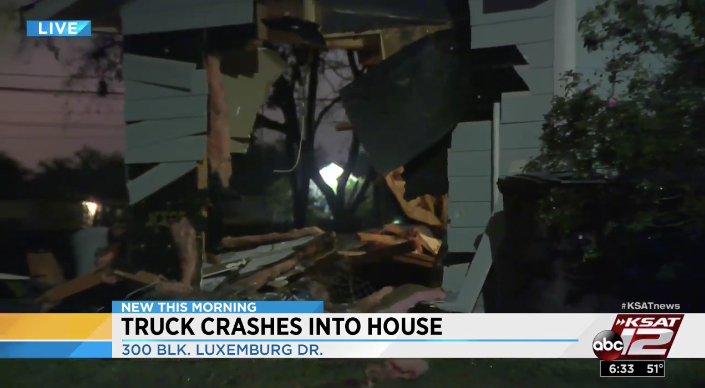 Although it's barely Wednesday, a number of strange car crashes have occurred across San Antonio this week.

A pickup truck crashed into a home early Wednesday morning, ejecting a sleeping mother and her baby out of bed and into their backyard. Police told KSAT that the bed was hit directly, thus launching Melissa Guzman and her year-old child out of the house. The accident, which occurred around 3 a.m. on the city's Westside, left Guzman with broken ribs and a broken shoulder. The baby only had scrapes.

Guzman's husband, Gabriel Martinez, was sleeping in the same room but in a different bed. He wasn't harmed, but told police the driver of the truck and a passenger ran away on foot.

Just a few hours before on the Southeast side of town, firefighters had to rescue a woman from her car after a pickup truck smashed into her vehicle in an H-E-B parking lot. Police told the San Antonio Express-News that the accident happened around 10:40 Tuesday night and that the pickup driver fled the scene.

The woman was taken to the hospital and is in critical condition, according to police. A passenger in her car was also hospitalized but is stable.

The H-E-B accident came less than 24 hours after a driver crashed into a Converse home. Though the crash may have been due to speeding and slick road conditions, it's unclear whether the driver will face charges, according to KSAT.

These crashes come just a day after a 2-year-old was run over while playing in the street. The driver fled the scene as well.