With a new President at the helm, conducting what Vox wisely called the "wholesale looting of America," it was almost impossible to get through the year unscathed.

This was certainly the case for San Antonio, where 2017 began with a tornado and ended with a mass shooting. However, the political shift at the national level (and a predictable GOP-led Texas Legislative Session) seemed to reignite a fight for equality and justice at home. It was a year of ups and downs.

To refresh your memory, here are some of the biggest San Antonio news stories we covered in 2017: 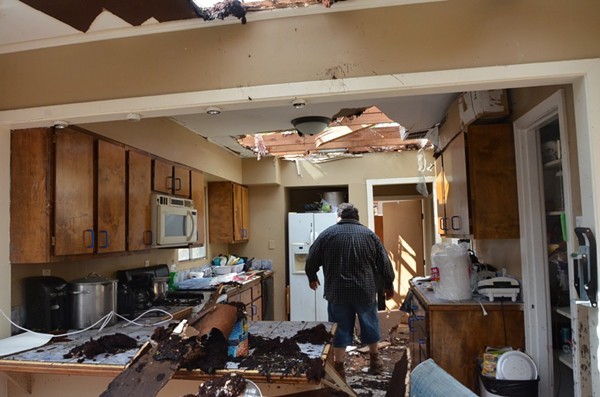 On February 20, a 105 mph tornado whipped through the neighborhood directly across Highway 281 from the Alamo Quarry Market, uprooting nearly 50 homes. The late-night tornado spanned 4.5 miles in a matter of minutes, and caused enough destruction for then-Mayor Ivy Taylor to declare a state of emergency. Dozens of San Antonians are still repairing their damaged homes.

No less than 13 male members of LVHS varsity athletic teams were arrested in March, after at least 25 underclassmen boys reported being violently sexually assaulted by the athletes in a hazing ritual. The allegations made national headlines and triggered an investigation by the Texas Rangers, which is still ongoing.

Not a great year for San Antonio Sen. Carlos Uresti. In May, the injury lawyer was indicted on 11 federal felony charges for recruiting his past clients to invest thousands in a non-bankrupt frack sand company. Uresti, a Democrat, goes to court for his "investment Ponzi scheme" in 2018. Seven months later, Uresti's back in the headlines for being accused of sexually harassing multiple female staffers at the state capitol over his decades-long career as a legislator.

After a close primary race, former Councilman Ron Nirenberg ousted then-Mayor Ivy Taylor from the mayor's office in a June runoff election. In the first six months of his leadership, the city's made a shift toward battling inequity across the city and conserving the environment — a more progressive focus than under Taylor's guidance. City Council also saw a major shuffle in the May and June races — where voters elected six new members to represent the city. The new group has been called the most progressive council in San Antonio's history.

Shortly after Gov. Greg Abbott signed a "show me your papers" bill into law in June, San Antonio, Bexar County, and City Councilman Rey Saldaña all joined a massive, multi-city lawsuit against the state. The law, among other things, would allow local cops to ask about immigration status even in routine police encounters, like traffic stops. City attorneys say the law openly condones discrimination, and prevents cops from doing their best work — something San Antonio Police Chief William McManus and Bexar County Sheriff Javier Salazar both agree with. The law is stalled while the lawsuit makes its way through the courts.

On a humid July evening, San Antonio police discovered 38 undocumented immigrants packed into the back of an unventilated, windowless tractor-trailer in a Walmart parking lot. Eight of them had died — and 20 were in critical condition due to severe heat exposure. The truck driver, who initially denied knowing he was carrying human cargo, has since been indicted on five federal charges for allegedly smuggling the immigrants and causing their death.

After a particularly heated public hearing, the San Antonio Independent School District board voted unanimously to include sexual orientation, gender identity, and gender expression protections to the district's non-discrimination ordinance. Anti-LGBT groups from out of town, upset over the failure to pass the so-called "bathroom bill" at the state legislature, focused an unprecedented amount of energy on fighting this decision. They lost.

A summer of violent white nationalist rallies across the country reignited a local movement to remove the towering Confederate soldier from Travis Park. Despite pushback from heavily-armed pro-Confederacy protesters (who claimed they weren't racist, just "proud"), the City Council voted 10-1 to remove the monument. A day later, it was gone. Currently, the space it's left behind has been replaced with the city's Christmas tree.

Since Hurricane Harvey, the largest hurricane to hit Texas in more than 50 years, miraculously dodged San Antonio, the city became home base for major hurricane relief efforts along the Gulf Coast and in Houston. Nearly 1,000 hurricane evacuees were taken to shelters in San Antonio, many without a home to return to, and the city sent 30 police officers and 19 vehicles to Houston to help with flooding rescue. Local chefs flocked to Rockport to provide hot meals to newly homeless residents and dozens of restaurants and music venues hosted fundraisers to support Harvey victims.

The tiny town of Sutherland Springs, located about 40 miles east of San Antonio, made national headlines after a gunman killed 26 people attending the town's First Baptist Church service on Sunday Nov. 5.  The church lost half its congregation. The tragedy, which reignited local and national debate over gun control laws, drew politicians — like Vice President Mike Pence, Attorney General Jeff Sessions, and Senator Ted Cruz — to the rural region. Shortly after the shooting, the Air Force admitted the shooter (a former airman) had a domestic violence charge they failed to submit to an online database that, if it had been reported, would have blocked him from ever purchasing a firearm. By now, families of the deceased have filed two different lawsuits — one against the Air Force, the other against Academy Sports & Outdoors — for their losses.