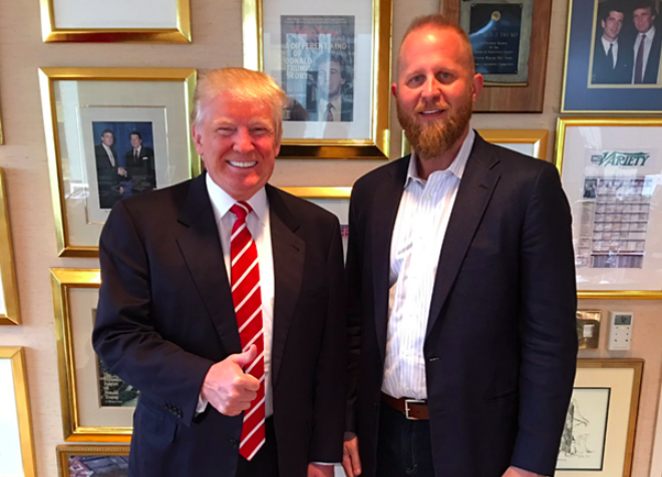 Senator Dianne Feinstein has summoned Brad Parscale — web director of San Antonio's Giles-Parscale design firm — to testify and submit documents to the Senate Judiciary Committee on any interaction he's had with Russian nationals.

This, of course, has to do with Parscale's integral role in Donald Trump's presidential campaign, in which he led the team's digital media efforts. As the main guy pouring campaign money into the Facebook advertisements and marketing strategies that ushered Trump into the White House, Parscale has inevitably been linked to those in Trump's camp suspected of letting Russia interfere with the 2016 election.

Parscale, who's called the Trumps "family," has previously denied any corroboration with Russia in regards to his campaign work.

In October 2017, Parscale told 60 Minutes's Leslie Stahl that the idea of him working with the Russians was "a joke."

"I know my own activities, and I know the activities of this campaign," Parscale said. "I was there. It's just a farce."

And in May 2017, when accused of relying on Russia's social media data to craft campaign ads, Parscale told Fox News he wouldn't have needed any outside help. In his own (very Trump-esque) words, the Republicans already have a "data set like never seen before."

“We didn’t need [data] from anyone else, it was right here in the United States of America, and the best data is right here," he said.

Sen. Feinstein, the ranking Democrat on the Judiciary Committee has also requested an interview with Dan Scavino, the Trump campaign's social media director. Her Wednesday letter to Parscale was addressed to his San Antonio company, Giles-Parscale Inc., a company co-owned by Jill Giles that received a hefty $93 million for its work on the successful Trump campaign.

However, the local design firm, known for providing interior design and branding to the Pearl's top residents (Hotel Emma, Supper, Local Coffee, Larder, and the Can Plant, to name a few), has tried its best to sever itself from the Trump brand.

That may be why Parscale moved the political arm of Giles-Parscale to Florida in June — leaving the more corporate and commercial efforts in San Antonio. Especially because, according to several reports, Parscale is already actively involved in Trump's re-election campaign planning.

It's unknown when Parscale will be scheduled to testify before the Senate committee.