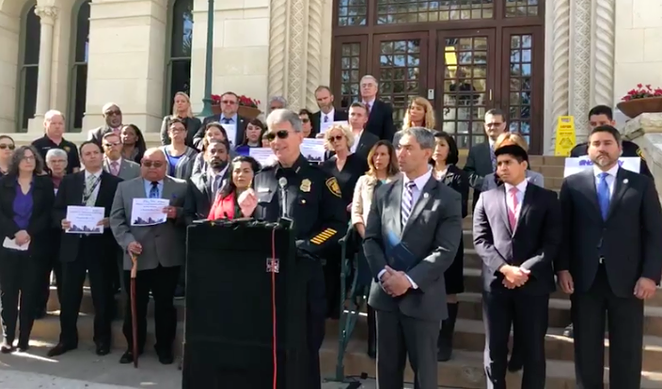 “Let me try to be real clear on this.”

That’s how San Antonio Police Chief William McManus began his response to questions at a Thursday press conference on the steps of City Hall. While the event was meant to recognize human trafficking month, McManus couldn’t ignore the news that Texas’ second in command, Lieutenant Governor Dan Patrick, had just requested a serious investigation into how he conducted a December smuggling case.

“I broke no protocols,” McManus said. “I did exactly what my chiefly prerogatives allowed me to do.”

By now, most San Antonians know what he’s talking about: The Dec. 23 arrest of a man in Southeast San Antonio for allegedly smuggling 12 people in the back of his semi truck.

According to McManus, the trip allegedly began and ended in Texas (no international borders were crossed) and the passengers are allegedly of Guatemalan descent. Since he chose to handle the crime using state law, instead of federal, McManus did not inquire about the passengers’ citizenship status, nor did he run their names through a criminal background check. To SAPD, these 12 were witnesses, if not victims, to a crime — and they treated them as such. There is no evidence that they are undocumented immigrants.

After getting their contact information, McManus released the 12 to a local immigrant aid nonprofit. The chief has said a federal agent was present throughout the investigation.

Regardless, some officials and members of the public believe McManus intentionally kept federal immigration agents from being involved in the case. In a Wednesday evening email to Attorney General Ken Paxton, Lt. Gov. Patrick suggested McManus may have broken Senate Bill 4, or SB4, Texas’ newest immigration law that requires local law enforcement comply with requests from federal agents to detain suspected undocumented immigrants.

That means Patrick believes the police chief refused to follow the request of a federal agent to detain the immigrants. Which, according to McManus, wasn’t the case.

“There were no SAPD protocols broken,” McManus continued. “[Homeland Security] was on the scene and they had every opportunity to what they needed to do. They weren't denied access. Why they didn’t take anyone into custody, I don’t know. But we handled the prosecution of the smuggling incident under the state statute.”


Nonetheless, the Attorney General’s office has begun an investigation into SAPD’s handling of the case.

Erica Schommer, immigration law professor at St. Mary’s Law School, said McManus decision was “no way in violation” of SB 4 — especially since some major parts of the law are still tangled up in litigation. In fact, she said McManus dodged a potential lawsuit by not detaining the 12 passengers.

That’s because SAPD officers are only allowed to run a background check or detain a witness to a crime if they have a reason to believe they are guilty of a crime. Since being a victim of human smuggling is not a crime under state law, officers had no right to do so.

“The San Antonio Police Department had no legal basis to hold [the witnesses],” said Mayor Ron Nirenberg, also present at the Thursday press conference. “The city could have faced legal liability if the police had held them.”

“It’s similar to SAPD responding to a home invasion call, and when they show up at the house they find that six other people were inside while the crime took place,” she explained. “Officers wouldn’t check their criminal history or detain them.”

According to Schommer, the fact McManus decided to process the case at the state level isn’t what’s so unusual about this case. It’s that SAPD were involved in the first place.

“In most smuggling cases like this, people are generally discovered by federal law enforcement first — either at a immigration checkpoint or at places known to be regular loading or unloading places,” she said. “This scenario in and of itself is what’s really strange about the case.”

It’s hard to know exactly what made McManus decide to hand the case over to state courts rather than the feds. Perhaps it was informed by the last time San Antonio was hit with a major smuggling case — in which federal agents didn’t allow the passengers to apply for immigrant protection under a certain visa granted for crime witnesses who comply with the police. Instead, the feds deported at least seven potential key witnesses. In that July case, McManus received a wave of criticism from the immigrant advocacy community. Now, he’s getting heat from the other side.

But, like last time, city leaders have run to defend McManus’ decision-making.

“Attacks on Police Chief McManus are nothing but political theatre based on a fictitious narrative,” Nirenberg told the crowd Thursday. “And the political operatives that are selling this theatrical production ... their story is fiction. There are facts that are important in this case, and our police department is upholding the law.”