The 'Most Widespread' Flu Outbreak in Recent History Spread Quickly, Thanks to Texas 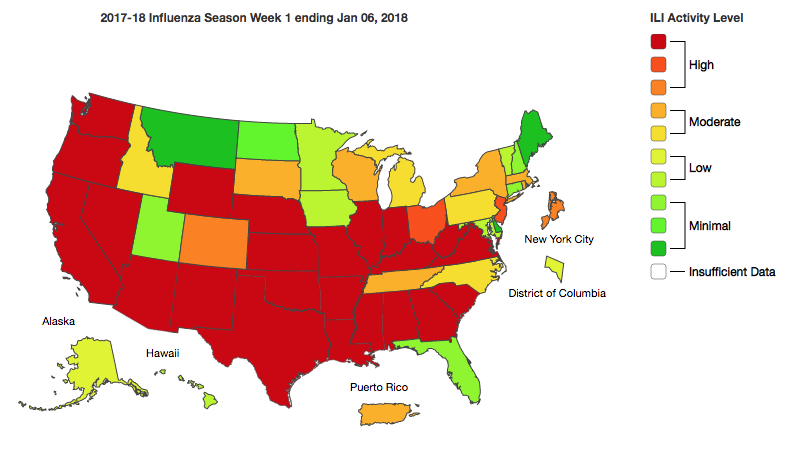 It turns out that the flu outbreak that's got the United States in a panic was partially caused by Texas.

While we knew that Texas had the highest number of flu cases in late December in the country (according to data collected by Walgreens), further information from the Centers for Disease Control and Prevention shows that the outbreak here in Texas quickly spread across the country.

According to Bloomberg, the recent flu outbreak is the most widespread since the CDC began collecting data more than a decade ago. An in-depth look from Vox shows the outbreak is especially aggressive because part of the strain – H3N2 in science terms – is difficult to prevent even with a shot.

Vox's report claims H3N2 is "nastier" than other types of flus, leading to more hospitalizations and deaths than in years past. According to the CDC's report collected from the first week of 2018, more than 80 percent of flu cases contained the H3N2 strain.

The CDC's influenza activity map shows that flu first surfacing in Louisiana and Mississippi before spreading to nearby states in the South, and eventually to Texas. Activity shows the flu making its way to Texas in early December 2017, but spreading significantly by the end of the month.

Within weeks, the flu had reached Texas' neighbors – Oklahoma, Arkansas and New Mexico – who then kept the chain-reaction going. By the start of January, the flu had touched most of the continental states on at least a moderate level, if not high.

Although the CDC cannot guarantee that a flu shot will prevent getting sick, it isn't too late to do so if you haven't already.