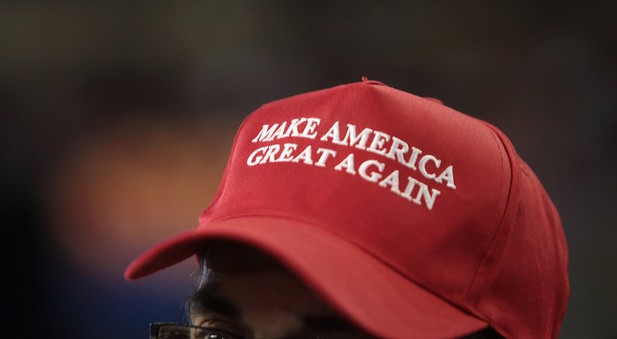 On Saturday, Jan. 20, exactly a year after San Antonian Alexei Wood was arrested in Washington, D.C. during an anti-Trump protest, Austin police officers had him in handcuffs.

The crime? Wood had snatched a red "Make America Great Again" cap from a man's head at Austin's Women's March. But unlike last year's offense, Wood is not facing 70 years in federal prison.

Wood was arrested in D.C. last year along with a group of 200 participants at an anti-Trump Inauguration Day rally. He'd driven to D.C. to photograph and film the day's events, and quickly identified himself as a photojournalist, not a protester. Nonetheless, Wood faced decades behind bars just for being associated with a riot that left some cars with broken windows. After a tense December trial in a D.C. federal court, a jury found Wood not guilty. He had only returned home to San Antonio a couple weeks ago.

And then he went up to Austin. A video of the hat snatching shows the red-capped man (who we now know is named Jon Colgin) interrupting a speaker at the Women's March. The crowd immediately begins booing and motioning for Colgin to leave the event. Before he can spout Trumpisms, a curly-haired blur swoops in and snatches the hat off his head. Wood runs off into the crowd, and Colgin chases after him.

See for yourself (fast-forward to the 1 minute mark):


According to Austin's Fox 7, Colgin and Wood fought for a moment before Austin officers handcuffed them both. Austin Police Department charged Wood for "theft of a person" and placed him in the Travis County Jail on a $2,500 bond. APD released Colgin without pressing charges.

Wood has since been released.