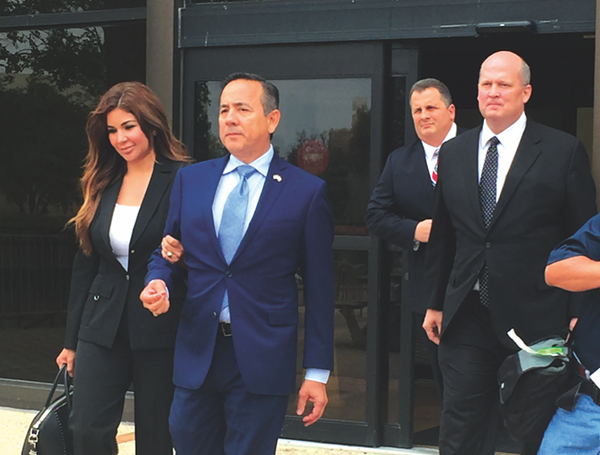 Texas Senator Carlos Uresti’s trial, in which he is facing 11 counts of money laundering and fraud, kicked off Monday morning in a packed federal courthouse in downtown San Antonio. If convicted, the lawmaker and personal injury lawyer could face up to 20 years in prison for each of his charges.

The road to trial for Uresti has been anything but uneventful: since he was indicted in May 2017, two federal judges have ruled his former attorney, Mikal Watts, needed to step down; a judge denied his request to dismiss one of his charges (the one alleging he acted as an unregistered securities broker); a top witness in the case was arrested for armed robbery; the trial was delayed three different times; and finally, one of his two co-defendants pleaded guilty two weeks before the trial began. And, to top it all off, Uresti has been accused of "constant" sexual harrassment during his decades-long career in the state capitol.

Uresti has maintained his innocence from the start.

Uresti arrived to the courthouse with his wife on Monday morning to hear opening statements in what is expected to be a 3-week-long trial.

The case involves a now-defunct fracking company, Four Winds, which allegedly accepted millions of dollars from investors who were told their money would go towards purchasing frac sand. Uresti, who provided legal services to Four Winds, allegedly helped recruit investors while maintaining a small stake in the company. According to the indictment, the investors never saw their money again, while Uresti and his co-defendants Stanley Bates and Gary Cain "misused investor's funds to enrich themselves and others."

Because four former Four Winds employees, including Uresti’s former co-defendant Stanley Bates, have already pleaded guilty for their involvement in the company, the trial will likely focus on unveiling not whether the company was indeed involved in illegal activity, but whether Uresti knew of it.

During opening statements, Uresti’s lawyers argued that he was unaware of the inner workings of Four Winds, and that he didn’t know the head of the company had used investor funds for anything unrelated to the business, the San Antonio Express-News reported.

Prosecutors disputed that claim, saying Uresti had lied to draw investors into Four Winds, and that he had gotten involved because he needed money “soon.”

With so many twists and turns, it’s easy to forget how, exactly, Uresti ended up on trial.

The road to court for Uresti began on February 16, 2017, when FBI and IRS trucks raided Uresti’s downtown law office. It was early on a Thursday morning when a black van and a white FBI trailer were parked in front of the law office, with agents walking in and coming back out carrying documents and other equipment. At the time, a local FBI spokeswoman only told the Current the IRS and FBI were “lawfully present conducting a law enforcement operation.”

Six months prior to the raid, the San Antonio Express-News published a story detailing Uresti’s involvement in the Four Winds. When Four Winds went bankrupt, several investors accused the company — and those involved with it— of fraud.

One of those investors was a woman named Denise Cantu. In August 2010, Cantu was driving her Ford Explorer with her 13-year-old daughter, 4-year-old son and two friends in the vehicle, when one of her tires blew out, causing her to wreck. She was the only person to survive the accident.

Cantu received a $900,000 settlement in a wrongful-death lawsuit related to the accident (Uresti was one of her attorneys). Most of that money was invested in Four Winds, and Uresti received 3 percent commission, plus a 10 percent stake, from Cantu’s investment. The majority of Cantu’s investment was lost.