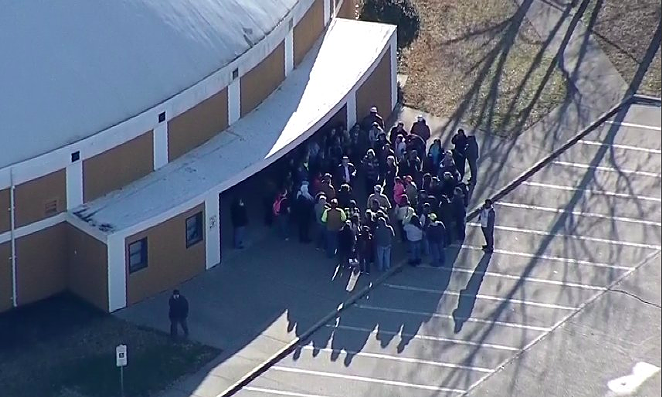 The 16-year-old boy believed to be the shooter who opened fire at Italy High School in Ellis County, south of Dallas, on Monday morning has been charged as a juvenile with two counts of aggravated assault with a deadly weapon, the Associated Press reported.

The father of 15-year-old Noelle Jones, the girl who was hospitalized with six gunshot wounds and appears to be the only student injured in the shooting, told Dallas' WFAA, “Her spirits are up, she’s doing pretty good.”

Noelle, a freshman at Italy High, suffered a gunshot wound to her neck, three to her shoulder, and two to her stomach. A GoFundMe page set up for Noelle’s medical expenses says she is “facing a lengthy hospital stay with multiple surgeries as well as an extended amount of time in physical rehabilitation."

A junior at Italy High, who was not in the cafeteria at the time of the shooting, told the AP that the suspect had a history of concerning behavior that she had previously reported to school officials, including creating a “hit list” in eighth grade that included her name, and one incident when he threw a pair of scissors at another student.

Witnesses arriving in the school parking lot the morning of the shooting told reporters they saw students sprinting out of the school, some hopping over a chain link fence to escape the gunfire.