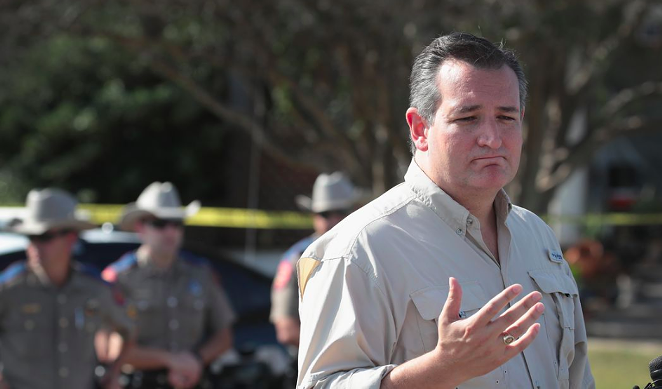 These senseless massacres have grown to be incredibly commonplace over a short period of time. According to CNN, three of the top ten deadliest shootings in modern U.S. history have taken place in just the last five months (Parkland, Sutherland Springs, and October's Las Vegas Strip shooting).  Wednesday's Parkland shooting is the 30th mass shooting in 2018 alone, according to the nonprofit Gun Violence Archive. Advocacy group Everytown for Gun Safety reports this being the 18th time this year a firearm was discharged on a school campus. Texas saw its own school shooting less than a month ago in the small town of Italy.

We're at the point where these major massacres, often orchestrated by white American men, are almost expected monthly occurrences. Or, in the words of former New York City Police Chief Bill Bratton in a Wednesday interview, "the new normal." It also seems that after each shooting, elected officials who hold the reins to changing laws that make these shooting sprees possible become less and less responsive to the once-rare, horrific scene of a public school littered with sobbing parents, blood-stained asphalt, and yellow tape.

After the Florida shooting, 21 of the Texans we've elected to represent us on Capitol Hill responded to the incident on Twitter (which has become the chosen platform for lawmaker's public statements).

Only two of those lawmakers called for some kind of action to change this pattern. The rest, like Senator Ted Cruz (who received $41,805 in campaign donations from gun rights groups during the 2015-2016 campaign cycle) tossed the standard "thoughts and prayers" line into the ether, and moved on to promote some other piece of legislation or campaign.

A whopping 16 Texas members of Congress from both political parities ignored the history-making massacre on their social pages altogether.

Here's what Texans in Congress said about the Valentine's Day shooting — that is, if they made time for it at all.

Heidi and my prayers are with the victims and families of those affected by today's senseless shooting in Florida. As always, we are grateful to the first responders who answered the call for help and quickly apprehended the attacker. https://t.co/gcH1IXwKsX

My heart is breaking tonight for the students, teachers, and families of Parkland, Florida. We cannot become numb to these tragedies. We simply have to do more.

Today’s event in Parkland is tragic and I cannot imagine a more horrifying situation for a child to go through. Many families will never be the same. I am grateful for the first responders and my heart is with the whole community as we continue to seek answers.

Horrible news coming out of Florida today. Thoughts and prayers are with all the victims of this senseless violence. https://t.co/lNDIbgoP12

Time and again, short moments of silence are followed by long moments of Republican inaction. Enough! This horrible, unending loss of precious lives must not be ignored by this Republican-controlled Congress, owned lock, stock, and barrel by the NRA.

Heartbreaking news coming out of Florida this afternoon. Our thoughts are with the Marjory Stoneman Douglas High School community. https://t.co/ixwOxIU76X

My thoughts and prayers are with the victims, families, and the state of Florida after today's horrific event.

This attack on innocent children in Parkland, Florida is heartbreaking. Please join me in keeping the victims, their families, and the Parkland community in our hearts. Thank you to our law enforcement for their response.

Devastating news coming out of Florida. Praying for the safety of students, teachers and the brave first responders.

On a day when love should be celebrated, many hearts are broken as they’ve lost loved ones to another senseless tragedy in Coral Springs, FL. May we all lift this family in prayer.

As we continue to learn more about the horrific situation at the high school in Parkland, FL, my prayers are with the students, teachers, their families, and our first responders.

This tragedy is absolutely heartbreaking. Please join me in prayer for all of those affected in this hateful act https://t.co/XR8MkUf0dn

Devastating news out of Parkland, Florida. Please join me in praying for the victims and their families, and the entire Parkland community - all of whom are grieving in the aftermath of this afternoon’s events.

Devastating news from Florida. As further details emerge, join me in praying for everyone at Marjory Stoneman Douglas High School and our first responders who rushed to the call.

I'm saddened by today's tragic event coming out of Parkland, Florida. My thoughts and prayers go out to the students, teachers, and families that were affected by this act of violence. #PrayersForParkland

Praying for all of the victims involved in the tragic shooting in Parkland, Florida today.

My family, staff & I send our thoughts & prayers to those affected by this tragedy in Parkland, FL

I'm praying for the victims of today's horrific shooting in Florida and thankful for the first responders who apprehended the attacker. https://t.co/s4lKjrM598

We stand with the community of Parkland, FL today. My heart is with the victims and families affected by this tragic attack on innocent life.