Students at Stephen F. Austin High School in Houston walked off-campus Wednesday to support a fellow student who's under an immigration detainer.

Houston Independent School District officials told ABC News that a January 30 fight between a group of students near the Austin High School campus led to the arrest of Dennis Rivera-Sarmiento. According to documents, Rivera-Sarmiento hit a female in the head with his fist and has since been charged with assault bodily injury.

Due to Rivera-Sarmiento's immigrant status, HISD officials told ABC News that an ICE detainer was placed on the 19-year-old student.

Hundreds of students walked out around noon on Wednesday, marching, chanting and carrying signs supporting Rivera-Sarmiento. The student body put together a press release saying that their classmate was racially profiled by another student, who they say bullied and called Rivera-Sarmiento names because he's an undocumented immigrant.

The teenager's lawyer spoke with Houston's KPRC, saying that the bully threw an open bottle at Rivera-Sarmiento and used a racial slur. The lawyer said Rivera-Sarmiento then pushed the other student. 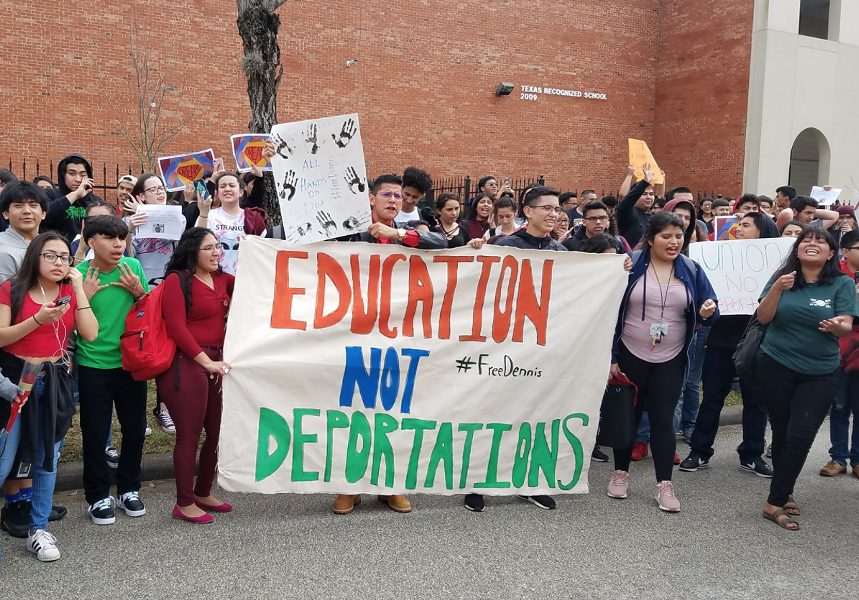 "Because Harris County jail voluntarily assists Immigration and Custom Enforcement (ICE), when Dennis was booked into custody, his fingerprints were immediately shared with ICE," the release said. That allowed ICE to place the detainer on Rivera-Sarmiento.

"Despite paying his bond, Harris County chose to keep Dennis and he was picked up by ICE agents," the release said.

Per ABC News, HISD officials denied assisting ICE with the arrest in the following statement:


"In line with the commitment expressed by both the Board of Education and the Superintendent, HISD has not used district resources to assist in deportation actions and we do not report students to ICE. Our Superintendent and administration remain steadfast in the district's commitment to educating every student regardless of their immigration status. Students are and will continue to be safe in our classrooms."

A district board member, Dr. Sergio Lira, told KPRC that Rivera-Sarmiento's actions during the fight went against the code of student conduct.

"He was cited for assault. Therefore, he was transported to Harris County, and [there] ICE officials took over," Lira said. "We have no control of that."