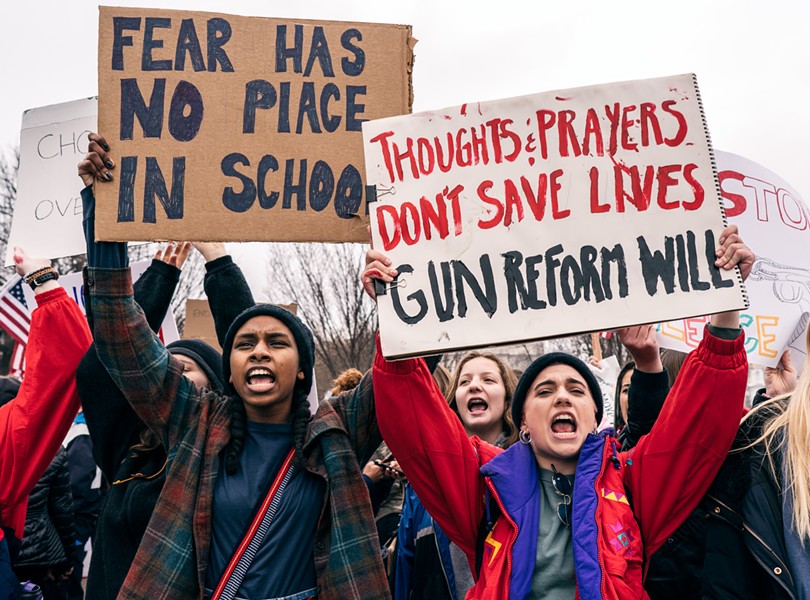 "It was terrifying," said 18-year-old Diego Quesada, a senior at Ronald Reagan High School. For Quesada, whose generation has never known a world without school shootings, it was a tipping point.

"I've been watching this build for years, since Sandy Hook," he said. "I reached a point where my staying silent was a disservice to students across the country."

So, Quesada decided to do something about it.

There's been a remarkable shift in the way the country's reacted to its latest mass shooting. Days after the Parkland shooting, the usual "thoughts and prayers" knee-jerk reaction from Congress and the White House was drowned out by a stronger, more organized response from high school students across the United States. It began with a handful of MSDH students who survived the February 14 shooting, calling out lawmakers, the National Rifle Association, and the White House for repeatedly rejecting gun control laws while more and more children die. The momentum has yet to slow down. Lawmakers have been called out on live TV about the major donations they've received from the NRA to block gun control laws. Major companies have severed long-standing ties with the NRA. President Donald Trump and other conservative leaders have been shredded on Twitter by teenagers who witnessed their friends shot multiple times by an assault rifle's bullets in the halls of their school.

The Parkland group of high school activists have since planned a national student walk-out for March 24 (dubbed "March for Our Lives") to protest this inaction - and another 15-minute-long walk-out on April 20, the anniversary of the 1999 Columbine High School shooting.

On social media, dozens of San Antonio students and teachers have indicated they'll join in the upcoming walk-out. And according to the website helping organize the second national walk-out, at least nine San Antonio high schools have officially registered to take part in the April 20 event.

Knowing his fellow students would participate, Quesada registered Reagan High on Saturday. Nearly 40 students have signed up in less than 24 hours.

"We understand that in Central Texas, this is a divisive issue," Quesada told the Current. "But we need to start that dialog, start having those conversations. We are ready to have them."

He also plans on skipping class March 24 to join the March for Our Lives walk-out in Austin – even though it's the same day as prom.

On Thursday, North East Independent School District (which oversees Reagan High) sent students home with a letter warning parents of the consequences that come with their kid protesting gun violence on campus in the coming weeks or months.

"The District will treat it as an unexcused absence, and the student will not receive credit for any work expected to be completed during the class period. The District will not accept requests from parents to excuse a class absence under these circumstances," the letter reads.

"While we understand people are passionate on all sides of the issues stemming from events in Florida, we cannot allow students to disrupt the learning environment during school hours."

Students who really want to protest and still get class credit can do so before or after school, it adds. San Antonio Independent School District said it will follow the same policy.

Many parents (and teachers) disagree with the districts' decision. A parent reposted NEISD's letter on Facebook with edits made in red ink, changing the text to support the students' interest in civic participation – it's since been shared over 800 times. A lawyer came forward and said he'd defend any student who's expelled or suspended for participating, free of charge.

But Quesada said he's not too concerned about NEISD's warning.

"As long as I know they aren't going to stop me, it's fine," he said. "It's the school district's right to follow its code of conduct, but it's my constitutional right to protest."