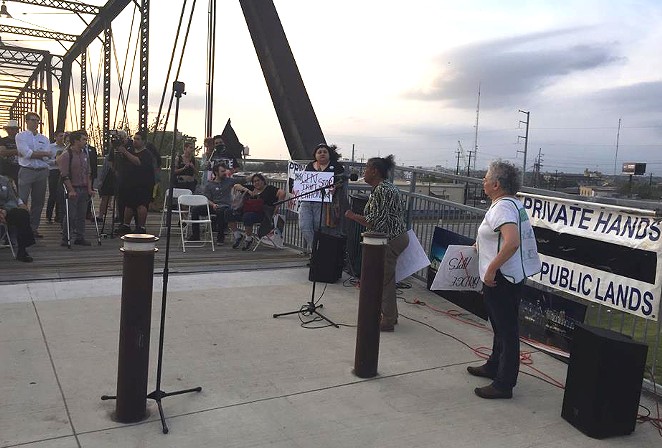 With the sun setting against the downtown skyline, 60 residents and activists gathered Monday at the Hays Street Bridge to blast City Manager Sheryl Sculley's recent approval of a controversial apartment development — albeit with conditions imposed — adjacent the historic walkway.

Attendees said the five-story structure proposed by developer Mitch Meyer would block residents' views of the bridge, once the primary connection between downtown and the predominantly African-American East Side. They also worry the 147-unit structure would hasten gentrification of surrounding neighborhoods.

"These backroom deals have got to stop," said Graciela Sanchez, director of the Esperanza Peace and Justice Center. "And they stop with the Hays Street Bridge."

Earlier this month, the city's Historic and Design Review Commission shut down plans for the Meyer's project. However, Sculley stepped in last Friday to green-light the deal with conditions attached, such as lowering its height and adjusting its design so it better fits in with the bridge.

The crowd at the protest — many holding signs that read "Culture over gentrification" and "Puente para la gente" — booed when Sanchez and other speakers mentioned the city's lengthy track record of coddling developers.

To be sure, the controversy surrounding the Hays Street development is only the latest that pits the San Antonio's culture and history against commerce. In this case, it's especially contentious because the City had minimal involvement in redeveloping the bridge — that $3.6 million came from federal and state funds, bolstered by local donations. What's more, the adjoining land was originally donated to the city with the intent of it being turned into parkland.

It's unclear whether Meyer, unavailable at publication time, will continue with the project now that Sculley has imposed conditions on it. Neighborhood activists say they will press hard to make sure the developer's company, Loopy Ltd., keeps its end of the deal.

They also vow to keep fighting the project in the courts.

The Hays Street Restoration Group, which spearheaded redevelopment of the historic structure, sued the City in 2012 over its decision to sell the land rather than develop a park. At the heart of that dispute, the City sold the donated land to Alamo Beer Co., whose owner, Eugene Simor, ultimately deeded the land to Meyer.

A Bexar County district court ruled that the city didn't comply with the original memorandum of understanding. Later, an appeals court ruled the city can't be sued for such a breach of contract. The dispute is now before the Texas Supreme Court, which has yet to say whether it will hear the case.

Amy Kastely, attorney for Hays Street Restoration, said she's optimistic the Supreme Court will hear the case given the important land-use issues involved. If the justices decide in her group's favor, the case would be heard again by an appeals court.

But the legal wrangling comes late for residents such as Celeste Orta, who returned to the nearby neighborhood in 2014 after graduating from college. When she moved in with her 89-year-old grandmother a few blocks from the bridge, she discovered rising property values had already displaced many of her neighbors.

"I wondered what happened to the strong black and brown community I left," said Orta, whose family has lived in the East Side neighborhood for more than 100 years. "Now I'm worried I won't be able to stay here on a teacher's salary."