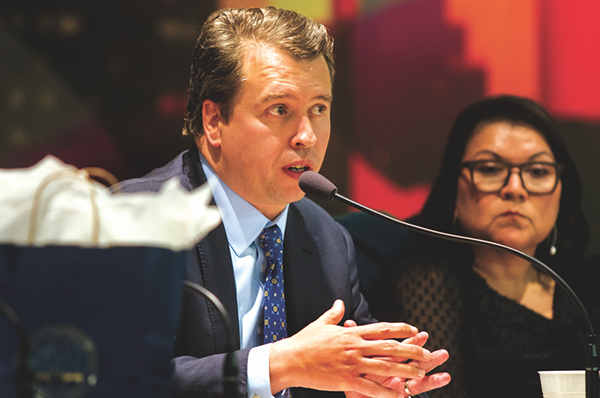 San Antonio ISD is in the midst of one of the most drastic turnaround efforts in the United States. If that sounds hyperbolic, just check out national education news websites like Education Week and the 74 Million. All eyes are on SAISD to see what superintendent Pedro Martinez will do next.

Martinez was hired in 2015 to rescue the struggling district. Since the 1960s, SAISD has been hemorrhaging students and falling in and out of trouble with the Texas Education Agency. While notable schools such as Young Women’s Leadership Academy and Travis Early College High School have achieved national Blue Ribbon status, 18 SAISD schools failed to meet state standards for the 2016-2017 school year. Many had been failing for multiple years.
With no members up for re-election in 2018 and political capital to burn, the SAISD board remains in lockstep with Martinez, clearing the way for the superintendent’s boldest moves – even the ones that may cost them the support of their teachers union.

Turning around a school is difficult, and it takes time. Turning around a district of 90 campuses and 50,000 students is a gigantic challenge. Making it even tougher, 93 percent of those students qualify as “economically disadvantaged,” the U.S. Department of Education’s category for low-income families. This income level is higher than the federal poverty line. But SAISD kids don’t fare well by that measure either. In two zip codes served by the district, more than 40 percent of people live in poverty. This is what researchers call “concentrated poverty,” and it’s kryptonite for schools.

Martinez isn’t shy about the strain that concentrated poverty places on the district, and he’s even less shy about the measures he’s taking to overcome it. The district has entered partnerships with Trinity University, the University of Texas at San Antonio, Texas A&M-San Antonio, Our Lady of the Lake University, the Culinary Institute of America, Relay Graduate School of Education, Tech Bloc, H-E-B, and many local nonprofits to increase student opportunities and support learning.

The board passed a $450 million bond in November 2016. On the same ballot, SAISD voters approved a $0.13 tax rate increase, bringing more than $30 million more per year into the district to hire master teachers.

The district has also enlisted more controversial partners: charter schools. At its March 19 meeting, the SAISD board approved a management agreement and charter application to bring in New York-based Democracy Prep Public Schools to operate its lowest performing school, P. F. Stewart Elementary. The decision has enflamed the San Antonio Alliance of Teachers and Support Personnel, the union that represents SAISD teachers and non-administrative staff.

Martinez is not flinching.

“We’re not going to apologize for advocating for these children,” Martinez said at a press conference on March 19, “Because somebody has to.”

The Alliance, along with representatives from other AFL-CIO affiliates, packed the boardroom ahead of the vote, accusing Martinez and the board of duplicity and of selling out the district.

“I heard that if this passes, it’s going to be open season for all your board members. They’re gonna come after you,” community advocate Henrietta Flores Legrange told board members during the meeting.

The board is not flinching either.

Trustee Art Valdez rarely says much during board meetings. He is the board’s vice president, an SAISD alum, aircraft engineer, and father of local artist Vincent Valdez. He is a steady voice, but not a loud one. Tonight, however, Valdez had something to say.

“I’ve lived in the district all my life,” Valdez said, reiterating his passion for the district. However, he said, San Antonio does not share his affection for its namesake district. “The mentality out there is that we have failing schools… It is time that we transform this district, or we’re going to continue the same as we have done for years and years and years.”

While the board may be taking bold steps, it is not entirely true that the alternative would be to continue on as they have been for years. A 2015 state law, House Bill 1842, allows the Texas Education Commissioner to shut down campuses that have failed to meet standard for five years or more.

However, that’s not the most extreme option available to the state under HB 1842. It could replace the school board with a board of managers, as it has done (for other reasons) in Southside ISD and Edgewood ISD.

The district’s life raft is a newer law, Senate Bill 1882, passed by the 2017 Legislature. This law allows districts to avoid sanction for two years by bringing in a nonprofit organization, charter operator, institution of higher education or other government entity to operate a failing school. 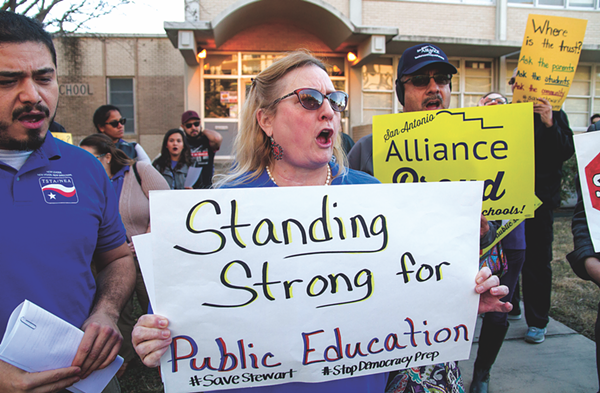 If an SAISD school becomes a charter school under SB 1882, the district will also get an additional $1,404 per student at that school.

Democracy Prep, by law and as part of their contract with SAISD, will be required to serve every student zoned to Stewart Elementary.

“The whole purpose of (the partnership with Democracy Prep), ironically, is to keep it as a neighborhood school,” Martinez said.

The district has other charter partners, and other schools that will be operated by SB 1882 partnerships. Charter management organization John H. Wood already operates Brewer Academy, a special needs campus. Relay Graduate School of Education will operate Ogden and Storm elementary schools under the SB 1882 rules.

The difference at Stewart is that Democracy Prep will have the authority to hire and fire teachers at-will.

As employees of Democracy Prep, SAISD teachers would lose one of the most protective contracts available to public school teachers in the state of Texas. Under a “continuing” contract, the district must engage in a lengthy process to fire a teacher. Proponents say that it prevents teachers from being punished when students struggle on standardized tests, which is common in high poverty schools. Critics say that continuing contracts protect underperforming teachers who could be doing more to advance their students in spite of the challenges of poverty.

The union has raised other concerns about the charter operator, including its history of “no excuses” disciplinary policies and inadequate services for English language learners. The district has gone to great lengths to answer those concerns. Time will tell how well things work on campus, but bilingual education and disciplinary practices that emphasize conflict resolution are two of the stated goals of the partnership.

Contracts, on the other hand, are clearer-cut. Democracy Prep employees are typically paid more than their peers in other cities where they operate, but they do not have continuing contracts like SAISD teachers, meaning it’s easier for the charter operator to fire educators.

As Martinez’s big changes build momentum, the big question now becomes whether the Alliance will again become a productive ally, or if union battles await him at every turn.