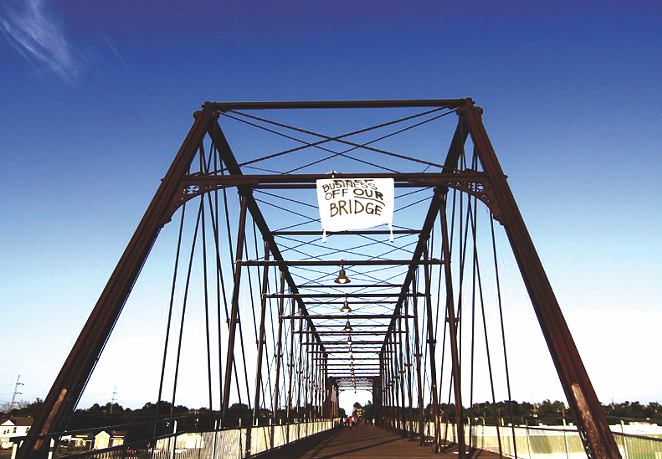 City Manager Sheryl Sculley may have made the controversial decision to conditionally green-light a five-story apartment complex next to the historic Hays Street Bridge, but it’s her elected boss who will feel the political heat.

Sculley’s surprise intervention into the process late last month may be the most visible test so far of Mayor Ron Nirenberg’s campaign pledge to foster more transparency and individual participation in local government. By reversing the decision of the Historic and Design Review Commission, which twice rejected the 147-unit structure, and disregarding months of resident input, her move makes a mockery of openness and civic engagement.

“I’m angry,” said Graciela Sanchez, director of the Esperanza Peace & Justice Center, who supported Nirenberg in the election. “I’m sitting on a few advisory committees for the city, and this makes me want to step away.”

Esperanza helped pull together the recent rally and vigil at the bridge, at which speakers blasted Sculley’s decision as another backroom deal driven by the business insiders. Residents of the adjacent Dignowity Hill neighborhood worry the proposed development will ruin views of the bridge, once the primary connection between downtown and the city’s East Side. There’s also concern the influx of new, market-priced housing units will accelerate the gentrification already pushing out longtime residents.

The city manager’s decision to go against HRDC was only the third time she has done so since she took the job in November 2005, said Shanon Shea Miller, director of the city’s historic preservation office. However, she points out staff considered commission input and ultimately decided residents’ concerns could be addressed through a conditional approval.

Sculley’s letter to the developer, Mitch Meyer, only allows him to move forward on the project so long as he adjusts its height and design and ensures there’s adequate space separating it from the bridge. What’s more, the final plan also must be examined by the Dignowity Hill Architecture Review Committee and the Historic and Design Review Commission.

It’s still unclear whether Meyer, unavailable at press time, will continue with the project under those conditions.

“I don’t think any of the design input was disregarded,” Miller added.

In a statement emailed to the Current, Nirenberg said: “Now, we have an opportunity to have the productive engagement on the future of the Hays Street Bridge that actually meets the best interest of all parties.”

But activists, some of whom have spent years working for the bridge’s redevelopment, said Nirenberg misses the point.

The city had minimal involvement in redeveloping the bridge — $2.89 million came from federal funds, and citizen donations accounted for another 20 percent of the cost. Allowing Sculley to serve as unilateral dealmaker is a dismissive smack to those who spent nearly two decades fighting for the structure’s restoration.

Hays Street Bridge advocates say they were active participants in the development process, fighting not once but twice before HRDC, and carving out time from their busy lives to build grassroots support for the structure now enjoyed by San Antonians and visitors alike.

“We followed the rules, and we were cheated,” said Marlon Davis, a born-and-raised Dignowity Hill resident who testified before the HDRC. “The outrage is real, the outrage is palpable, and it’s not going away.”

Councilman Rey Saldaña’s District 4 is nowhere near the Hays Street Bridge, but he said he felt compelled to express his disappointment to Sculley. While the conditions in her letter address design concerns, they didn’t include activists’ call to set aside a portion of the development for affordable housing.

“The activists and residents who have come together to advocate for the bridge have not gotten a lot of traction at City Hall,” Saldaña said. “And that upsets me.”

Still, there’s a chance bridge advocates could win in court, even if they’ve been largely edged out of the review process.

The Hays Street Restoration Group, which spearheaded redevelopment of the historic structure, sued the City in 2012 over its decision to sell the land rather than develop a park. At the heart of that dispute, the City sold the donated land to Alamo Beer Co., whose owner, Eugene Simor, ultimately deeded the land to Meyer.

A Bexar County district court ruled the city didn’t comply with the original memorandum of understanding. Later, an appeals court ruled the city can’t be sued for such a breach of contract. The dispute is now before the Texas Supreme Court, which has yet to say whether it will hear the case.

Amy Kastely, attorney for Hays Street Restoration, said she’s optimistic the Supreme Court will hear the case given the important land-use issues involved. If the justices decide in her group’s favor, the case would be heard again by an appeals court.

Regardless of how the legal wrangling plays out, activists including Esperanza’s Sanchez say they’re not done fighting. The group has urged members and residents to call council and the mayor to voice their outrage over the city manager’s intervention. While Sculley will draw the immediate ire of activists, the political fallout is likely to sweep up the mayor and city council members, especially if it spreads to the growing number of people from across the city who view the bridge as a unique part of San Antonio’s character.

Those angry with the decision will view the approval process as part of the problem, said Christine Drennon, director of Trinity University’s urban studies program.