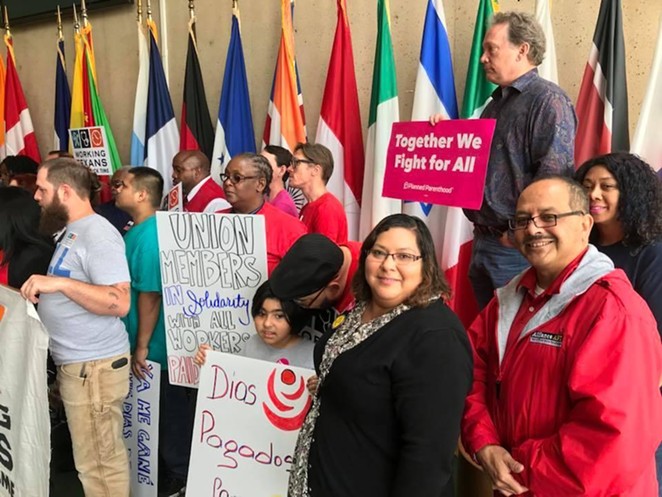 A coalition of labor and community groups including the Texas AFL-CIO wants San Antonio voters to decide whether the city should require businesses to give workers paid sick leave.

In February, Austin's city council voted to mandate worker sick time, making it the first Texas city to do so. Now, the group Working Texans for Paid Sick Time is gunning to put similar measures on ballots in San Antonio and Dallas in time for the November elections.

"It's become increasingly clear that many people are caught in a position where they can't afford to take time off to take care of themselves or the members of their families," AFL-CIO Texas Preside Rick Levy said.

"Politics is so broken in Washington and in Austin that we've got to be more aggressive and more proactive in taking the fight to the voters," he added.

About 40 percent of Texas workers don't have paid sick leave, according to data from the Institute for Women's Policy Research. The number is higher for the state's Hispanic workers.

To get the proposal on the ballot here, Working Texans for Paid Sick Time must obtain signatures from 10 percent of all eligible voters in the most recent municipal election. That means around 75,000 signatures, according to the Bexar County Elections Department.

The group will start by collecting those signatures from its own membership, then take its petition push to the streets, Levy said. Its backers include MOVE San Antonio, Planned Parenthood Texas Votes and Texas Civil Rights Project, among others. U.S. Senate candidate Beto O'Rourke also has endorsed paid sick leave.

If the coalition can get the measure on the ballot this fall, it could benefit from an energized progressive electorate, which views the midterms as a referendum on the Trump presidency.

Not surprisingly, the effort is likely to face opposition from the Republican state lawmakers, some of whom have already said they want to overturn the Austin new rules, which go into effect October 1. State Sen. Donna Campbell, whose district includes part of San Antonio, posted on Twitter that she'll push for "statewide legislation to stop Austin's intrusion into the private sector and protect small businesses in Texas.”