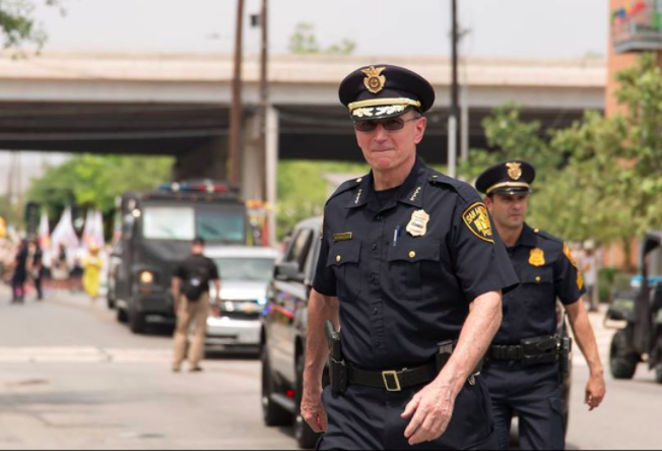 After declining comment for a Buzzfeed article critical of the San Antonio Police Department's treatment of women, Chief William McManus has blasted the piece, saying recruiting and promoting female cops is a top priority.

The chief was joined by City Manager Sheryl Sculley, who also defended the department's record and highlighted work of the Women in Policing task force she created to bulldoze department barriers.

The lengthy Buzzfeed article, posted yesterday, used department records to catalog instances sexual misconduct and paints a picture of a force that turns its back on the women in its ranks. It also detailed the transgressions of then–SAPD officers Emmanuel Galindo and Alejandro Chapa, convicted last year of coercing women to trade sex for cash and legal favors.

“Sexual misconduct and harassment of any kind is not tolerated in the San Antonio Police Department," McManus said in his e-mailed statement. "The article is focused on the conduct of a few officers whom I fired for criminal and/or administrative violations. Many of the negative comments in the article were made by unnamed sources and an attorney who exclusively represents officers who have been fired for the most egregious offenses, including sexual misconduct. He should not be considered a credible source."

For the record, Buzzfeed's piece included other named sources beyond the lawyer. It also included department-supplied data, some of which highlights the serious amount of ground SAPD must cover to lift women in its ranks.

"The fact is we are focused on recruiting more women into the training academy, and we continue to see higher and higher percentages of female cadets in each class," McManus also said in his statement. "Unfortunately, the promotional process below the rank of deputy chief is controlled by the Collective Bargaining Agreement, not the chief of police.”

For her part, Sculley pointed out that the percentage of women on the force has more than tripled since 2006, rising from 3 percent to 10 percent.

“During that time, nearly 250 women have been accepted to the training academy, and 62 percent of the women on the force today began their careers during my and Chief McManus’ tenure," she said in her statement. "The fact of the matter is the Collective Bargaining Agreement with the police union is a significant obstacle to improving the promotional process within SAPD because it limits the chief’s authority. Nonetheless, I created a Women in Policing task force focused on eliminating other barriers to employment and promotion that exist in SAPD.”

Sculley's task force has implemented short-term improvements such as exit interviews for female officers and increased recruitment of women to special units, according to city officials. It's also exploring 24-hour childcare options for the department and test-preparation programs targeting female officers.

It may be tempting to write off McManus' and Sculley's criticism of the Collective Bargaining Agreement as bad blood. Both, after all, sweated out a three-year fight over the San Antonio Police Officers Association's current contract. Not to mention, the reforming McManus has been a frequent target for the association.

However, it bears pointing out that the contract prohibits the kind of merit-based promotion that could more quickly propel women up the ranks. It also locks in how many new high-ranking positions open up and how quickly.