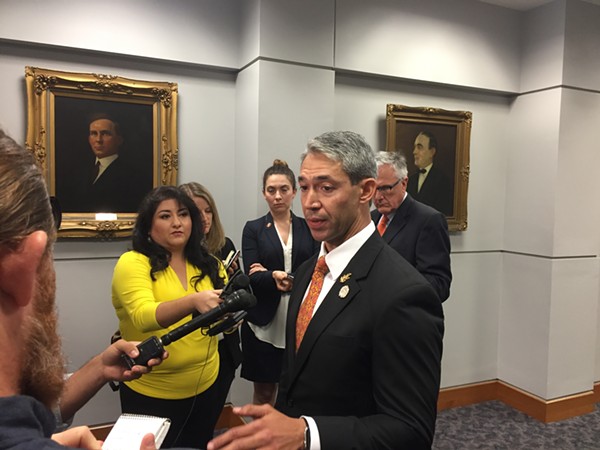 San Antonio will not bid to host the 2020 Republican National Convention.

In a closed session this afternoon, Mayor Ron Nirenberg and city council opted not to chase the event — one claim would yield tens of millions of dollars in economic impact and detractors argue could create chaos and lasting image problems for the city.

In the hall outside the meeting room, Nirenberg told reporters that council wasn't convinced the convention's disruptions, from increased traffic to potentially violent protests, would outweigh its economic positives. As an example, he pointed to Cleveland's $40 million in security spending when it hosted the 2016 Republican convention.

"History is clearly our guide, and we have considered items such as those," said Nirenberg, who added that the city hasn't pursued a bid on a national political convention in 20 years.

The Republican National Committee contacted San Antonio about a potential bid as early as December and visited with city leaders in March to gin up interest.

Members of council and Nirenberg's mentor, former Mayor Phil Hardberger, have spoken openly about the image risks of hosting the convention because of Republicans' presumptive 2020 nominee. President Trump's tireless anti-immigrant rhetoric is a political liability for a city that's two-thirds Hispanic and benefits from close cultural and trade ties to Mexico, they maintain.

Even so, Nirenberg said there were "clear rules of engagement" for the council discussion, which kept it focused on economics, not politics.

No vote was taken during the meeting, although council members said an obvious majority was against pursuing a bid. So far, only Charlotte, N.C., has publicly stated an interest in hosting.

Greg Brockhouse — this council's consistent contrarian — and Councilman Clayton Perry met with reporters after Nirenberg's brief press conference to express their disappointment. Brockhouse said the decision was an economic misstep that betrays Nirenberg's lack of leadership.

"He doesn't believe in the greatness of San Antonio," Brockhouse said. "He only talks about the things we should be afraid of."