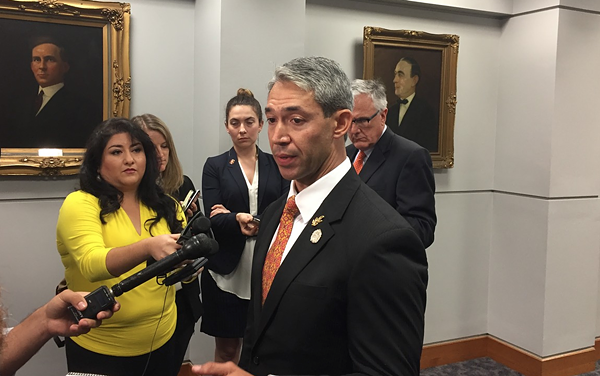 It didn’t take long for critics to blast city council’s decision not to bid on the 2020 Republican National Convention as a purely political move.

After last week’s closed-door deliberation, Councilman Greg Brockhouse lashed out at Mayor Ron Nirenberg, saying the progressive-leaning council’s agenda stood in the way of economic common sense. “If you’re Republican or you voted Republican in the city of San Antonio, you’re not welcome here, according to this city council,” Brockhouse said.

And, ever the gracious loser, Trump 2020 Campaign Manager Brad Parscale — who Twitter-trolled Nirenberg for not jumping on a convention bid fast enough — was back on the app once the decision came down. “A city council of left-wing activists destroying the economy of #SanAntonio,” he tweeted. “@Ron_Nirenberg and city council just made the business community their enemy. Have fun with that.”

But economics mattered in this debate. A lot. Council was under strict guidelines to focus on the financial merits of the bid during the meeting, not the politics. Brockhouse acknowledged the discussion in the room stayed on topic.

The reality is that numbers just aren’t on the side of bid proponents, according to observers. Beyond the economic impact figures advocates waved around, there’s little proof the convention would be a windfall to the Alamo City. To the contrary, a wealth of research suggests it could be a wash — or worse.

“Do these things make money for the city?” asked former Mayor Phil Hardberger, who attended a March 23 meeting where the Republican National Committee tried to interest city leaders in hosting. “That’s a cloudier question than a lot of people would like it to be.”

Sure, big political conventions fill hotel rooms. They also bring a four-day cash infusion as delegates dine and drink and buy trinkets for their kids. But, all considered, those constitute an economic piss in the ocean. Especially for a city the size of San Antonio.

A study of every Republican and Democratic convention between 1972 and 2004 by economists at Massachusetts’ College of the Holy Cross found no discernable impact on employment, personal income or per-capita personal income in any of their host cities.

“These conventions are not primary movers of economic growth,” said Rob Baumann, head of Holy Cross’ economics department and one of the study authors. “We’ve never seen any place get rich from doing one of these.”

Baumann and his colleagues haven’t just scrutinized political conventions. They’ve also run the numbers for Superbowls, the Olympics and other major events that pit cities against each other for hosting rights. One thing always holds true: organizers pit municipalities against each other to squeeze out larger concessions. So the economic benefits sold to constituents often shrink as cities pony up more infrastructure spending and cash.

“If there’s another bidder out there — like Charlotte, in this case — then these bidding wars only create a worse deal for your city,” Baumann added.
The hospitality industry employs one in eight San Antonians, and the 2020 convention would come in August, a time when summer tourist traffic is starting to slide.

Hotel housekeeping staff or the barista at the downtown coffee shop may see a little more in tips, but traffic snarls, barricades and potentially disruptive protests cut into the profits of other businesses, experts point out. And when such a high-profile event rolls in, it can actually convince tourists or other conventions to delay a visit or look elsewhere.

“[Convention proponents] will always tout the economic benefits, but a lot of the profits aren’t staying in your city,” Baumann said. “If I fly in on a national airline, that money doesn’t stay in San Antonio. The major hotels are most likely publicly traded chains, so that profit doesn’t stay either. Meanwhile, the security is still your problem, so is the congestion and any infrastructure the RNC wants you to pay for.”

To that point, Nirenberg and council considered input on how the Republican National Convention would affect neighborhoods, how many additional cops it would need on the streets and how badly it would roil traffic. They weighed those factors along with the $6 million or more the city would need to pay up, depending on how much business leaders could privately raise to cover the $70 million the RNC demanded from potential hosts.

“There’s a reason why the city of San Antonio has not bid on a political convention of this nature for 20 years and why so few cities in this country see that this season is even worth it,” Nirenberg said.