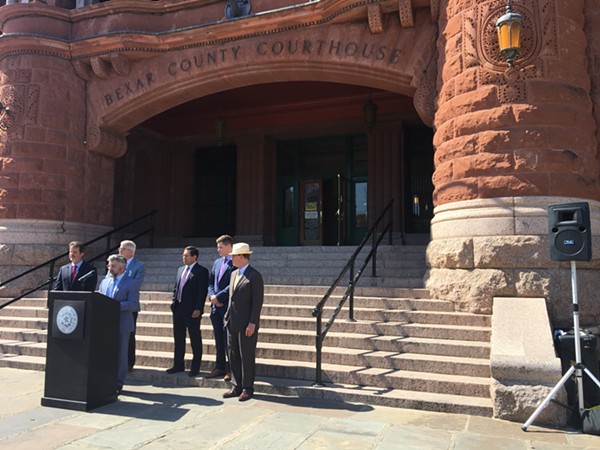 On May 10, San Antonio law firm Phipps Anderson Deacon LLP filed a lawsuit on behalf of Bexar County against opioid manufacturers, promoters distributors, including Purdue Pharmaceuticals, for misleading doctors and patients about the addictiveness of their painkillers.

Settlement money from the case, which is expected to go to court in two years, would provide more funding for addiction treatment. The county cites multiple reasons for bringing the lawsuit, noting Bexar County has the fifth highest opioid overdose death rate in Texas, according to the Center for Disease Control (CDC).

During a press conference Wednesday at the Bexar County Courthouse, Wolff’s chief of staff, T.J. Mays, outlined the four main goals of the task force. These include increasing the availability of overdose reversal medications, training of healthcare providers who prescribe opioids, community education programs treatment services for addiction.

"The treatment fund that is going to come from this lawsuit is going to help us identify and bridge gaps in our treatment here in Bexar County – and believe me, there are many, and we are going to do what we can to close them up," Mays said.

The county’s lawyers chose to go to state court rather than federal court, a route that Wolff said he supports and that other counties, including Travis, El Paso Dallas, are also pursuing. In addition, Wolff said the lawyers will be paid on a contingent fee, meaning they will only be paid if they win. After legal fees, all money collected by Bexar County will go to treatment programs.

While Wolff said he does not know how much money the county could collect, he said there is a chance that it could be as successful as lawsuits against the tobacco industry, noting similarities in the two cases.

"The issue though in this [lawsuit] is that the pharmaceutical industry is widespread and has tremendous political clout, much more so than the tobacco industry," Wolff said. "They were sort of isolated to the tobacco-producing states, so this one has a lot more power."

At the press conference, Josh Green of Recovery, a local nonprofit that assists young addicts and their families, said he supports the task force and lawsuit, and recalled his own struggle with opioid addiction, which started when he was prescribed painkillers for an injury.

"Any funds won in this litigation are going to go back to what we know we need to help our residents and that is treatment," Green said. "We know that treatment works and that recovery is possible and this is an amazing step in the right direction."

The Healthcare Distribution Alliance (HDA), the national trade association representing distributors, including AmerisourceBergen, Cardinal Health and McKesson, reached out to the San Antonio Current May 17 with the following statement.

“The misuse and abuse of prescription opioids is a complex public health challenge that requires a collaborative and systemic response that engages all stakeholders," said John Parker, senior Vice President of HDA. "Given our role, the idea that distributors are responsible for the number of opioid prescriptions written defies common sense and lacks understanding of how the pharmaceutical supply chain actually works and is regulated. Those bringing lawsuits would be better served addressing the root causes, rather than trying to redirect blame through litigation.”