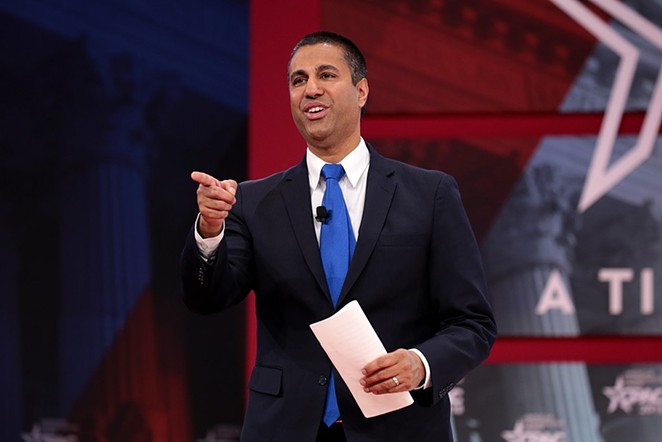 City council took a baby step toward ensuring San Antonians have access to a free and open Internet — a concept techies refer to as "net neutrality."

Council's governance committee authorized further discussion of Councilman Manny Pelaez's proposal to require Internet providers that do business with the city not to block or prioritize traffic on their networks. The plan also could allow the city to penalize providers that do so while serving consumers.

The committee's move comes after the Federal Communications Commission, led by chairman, big-business shill and Twitter hate magnet Ajit Pai, gets ready to roll back existing net neutrality provisions. Without those, telecom companies could quash competition and free speech on the Internet — a response consumer groups warn is increasingly likely as Netflix and other streaming services eat up the telecoms' bandwidth.

Mayor Ron Nirenberg said S.A.'s measure would ensure residents are treated equitably when they buy online access — a 21st Century necessity. Another risk of throwing out net neutrality protections is that consumers could face the Death of Nickels and Dimes as charge add-ons to stream video, game or access social media, experts warn.

"The big cities of this country are banding together on this issue to use the power of the purse," Nirenberg said, pointing to New York's effort to boycott providers that don't adhere to net neutrality. "In pushing on this, San Antonio is a pacesetter for the rest of the country."

With the FCC rules set to expire on June 11, 30 states have introduced net neutrality protection legislation, although regulation-averse Texas isn't one of them.

Shortly after today's council action, three Republicans in the U.S. Senate joined with Democrats in a vote to repeal the FCC's anti-net neutrality ruling. However, a similar vote looks unlikely in the Republican-dominated U.S. House.