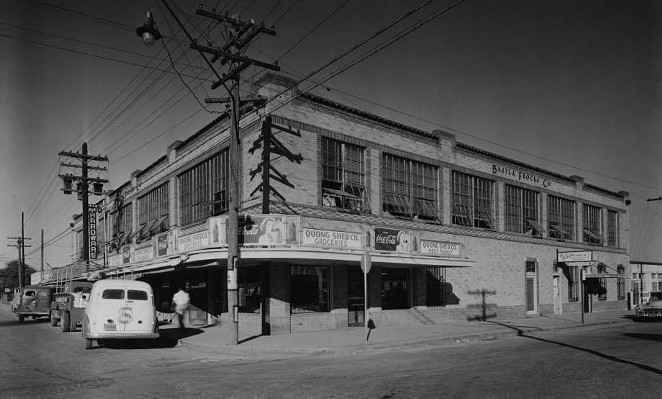 In one month the nearly 90-year-old Basila Frocks building will undergo renovations aimed to restore it to its original glory.

The two-story historic building on North Zarzamora Street has been abandoned for eight years. With its boarded doors and shattered windows it has become a stark contrast to the beautiful architectural monument it was in 1929. Standing in the center of Prospect Hill, one of the few non-segregated neighborhoods in the early 20th century, the Basila Frocks was one of the highest quality buildings on the West Side. When it was first built by a Syrian family, it was used as a factory for women’s dresses and has since been home to convenience stores, restaurants and gyms.

When co-developer and investor Dan Markson first heard that the building was facing possible demolition, he did everything he could to save the monument. Markson’s vision matched the Westside Development Corporation’s five-year search for a community project of this magnitude, leading to a partnership to save the Basila Frocks.

“The goal of building is to have it be a mixed-use building with all kinds of small businesses,” Markson said. “Some retail, some wholesale, some manufacturing and to restore the building to its original grandeur.”

While the WDC has past experience in providing technical assistance to developers, this is the first time they have partnered with a private developer, which has opened doors for them.

“This project will lead us to a new plateau as an organization where we would have real estate under us, programmable space and area to help incubate and support small businesses,” said president and CEO of WDC Leonard Rodriguez.

Markson said Prospect Hill has been improving overall with plans for other renovation projects from the city and an influx of new homeowners. He said he hopes the Basila Frocks renovation will help continue this trend.

“Vacant buildings bring crime, fire, danger and cost the city more in services than to assist in getting them back online,” Markson said. “This building, instead of being the rotten core of a piece of fruit should be a little star that is shedding light all over the neighborhood rather than something that is a problem.”

Rodriguez said the renovations, which will keep the historical integrity of Basila Frocks intact, are expected to take six to eight months to complete. By fall, Rodriguez said he hopes to open the space for building tenants.

“This is a signature project that is important to the development of the Westside Development Corporation,” Rodriguez said. “It allows us to fulfill what the organization’s mission in terms of promoting the development and redevelopment of real estate in our area and then honoring the culture, the history and the character of the West Side.”