Will Hurd’s Playing to the Center in Texas’ Most Competitive Congressional Race. But His Record Tells Another Story. 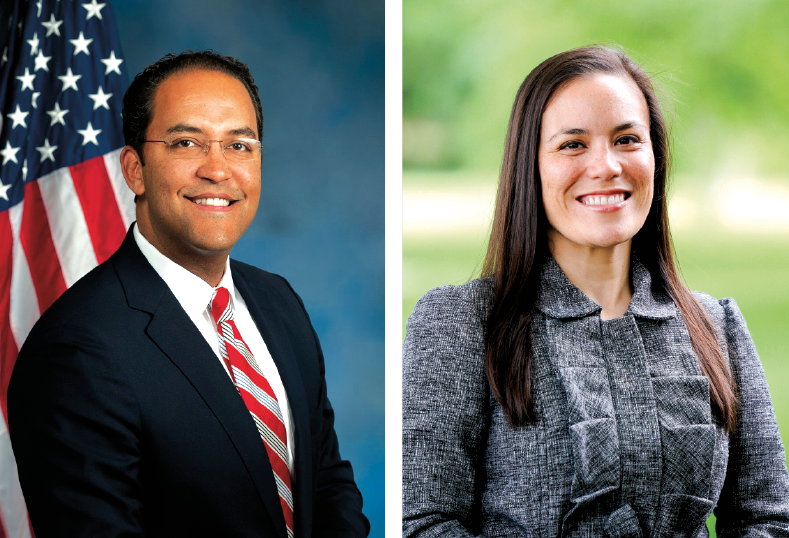 Last month, during a BBC interview, U.S. Rep. Will Hurd blasted the Trump administration’s “zero-tolerance” immigration policy with such virulence, the interviewer asked the Republican if perhaps he’d thrown in with the wrong party.

It’s easy to see why. In recent media appearances, Hurd’s made great effort to distance himself from a few of the Trump administration’s most controversial issues — namely, the border wall and stripping migrant parents of their children.

But Hurd, who faces a midterm challenge from San Antonio Democrat Gina Ortiz Jones, has a record that puts him much closer to the president’s camp than his pronouncements might let on. He’s voted in line with Trump’s position more than 95 percent of the time, according to a tally by the blog FiveThirtyEight.

The Hurd campaign didn’t respond to interview requests. But it’s not hard to theorize why the candidate’s eager to show a moderate public face. He’s defending the state’s most competitive congressional seat, the Texas 23rd District, which has flipped like a light switch in recent years. The district narrowly went to Hillary Clinton in the 2016 presidential election, and November’s contest looms as trends favor both Democratic and female candidates.

Jones has hit Hurd’s record on the campaign trail. The number one issue voters ask her about is health care, she said, pointing out that Hurd has voted to dismantle Obamacare.

What’s more, Hurd in January 2015 voted to end President Obama’s Deferred Action for Childhood Arrivals, and, in May 2015, to delete language that encouraged the Defense Department to let DREAMers serve in uniform. Last year, as a member of the House Homeland Security Committee, he voted along party lines for a security bill that included $10 billion for a border wall.

“He’s part of the problem,” Jones said. “I liken his [recent statements on immigration] to someone lighting your house on fire and then showing up with a bucket of water to help put it out.”

To use a less polite metaphor, Hurd knows Trump’s wall and children in cages are unpopular, and he’s a smart enough politician not to shit in his own lunchbox. In addition to portions of San Antonio, the 23rd District spans a third of the U.S.-Mexico border. Even among conservatives in that region, the idea of a 30-foot wall towering over their property and decimating local wildlife isn’t exactly popular.

In fairness, Hurd hasn’t matched the viciously partisan tone of many of his House colleagues. He reached across the aisle with GOP moderates to shoot for a bipartisan deal on immigration. Also, he made headlines last March by taking a 1,600-mile road trip with Democratic U.S. Rep. Beto O’Rourke, who’s now running for Ted Cruz’s Senate seat.

But, those efforts aside, Hurd’s two terms representing the district haven’t exactly shown him leaning across the aisle with great regularity.

Conservative business interests like the U.S. Chamber of Commerce and the Club for Growth give him glowing reviews on their congressional scorecards, but progressive groups tend to rank him in the single digits. The American Civil Liberties Union rated him at 7 percent, Planned Parenthood Action Fund at 5 percent and the League of Conservation Voters at a whopping 2 percent.

Hurd eked out narrow victories against Pete Gallego, his opponent in the past two elections — the last by a 1.3 percent margin. But beyond national trends, a few other factors could work against him this time around.

Jones’ campaign has raked in $2.2 million since she entered the race — more than Gallego raised over the life of his whole 2016 run. So far, Hurd has raised $2.4 million.

And while Hurd was able to tout his track record as a former CIA officer, Jones’ credentials as a former Air Force intelligence officer and an Iraq War veteran are also likely to appeal to mainstream voters.

Jones, who last week launched her first TV spots of the campaign, said she plans to keep her ads focused on telling her own story rather than mounting attacks. But, she added, she’s not afraid to point out exactly where her opponent stands.

“When he hasn’t voted against his constituents’ interest, he just hasn’t shown up,” she said.