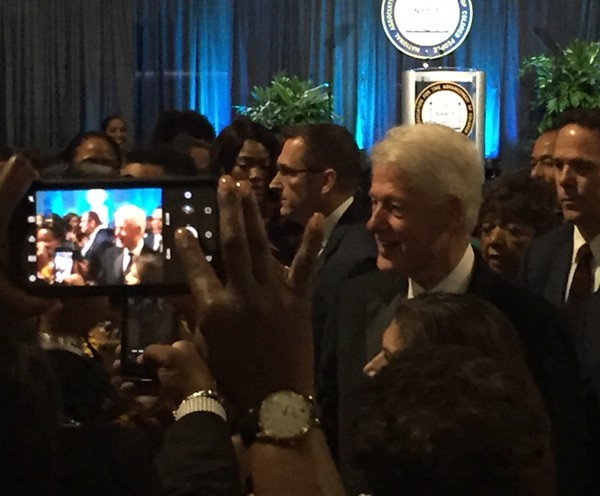 Wednesday night, for ten minutes and then some, former President Bill Clinton lived up to his nickname of "Consoler-in-Chief."

Clinton was in town to introduce his friend, former San Francisco Mayor Willie Brown, as he received the Spingarn medal from the NAACP at the gala closing the group's five-day convention here. The award recognizes the "highest or noblest achievement by a living African American."

Clinton arrived late, wandering into the dinner's roped-off VIP section more than an hour into the program. Almost instantly, attendees forgot the red velvet cake they'd just been served and swarmed the former president, leaning across the barriers to snap selfies, hug and reach out for a handshake. Stone-faced Secret Service agents clustered around the white-haired statesman as he worked the crowd. The frenzy only subsided after another speaker appeared onstage urging them to let the show move on.

Clinton had his turn at the podium a half-hour later, opening his address by recalling the time he spoke before the NAACP when he received an Image Award from the group.

"I said [at that time] what really matters is our common ground," Clinton said. "When we forget it, we suffer. We should remember this today when voting rights, when family security and the best interest of children, when the bonds with our neighbors and the friendships of our oldest allies are strained, all because we have begun to think that our differences matter more than our common humanity. We need the NAACP more than ever."

While Clinton didn't mention current President Donald Trump by name, it was clear at whom he took aim. The crowd responded with thunderous applause.

The opening of Clinton's address, of course, dovetailed with the theme of the NAACP's conference, "Don't Hate. Vote." Speakers during the five-day convention repeatedly called out Trump for deepening racial divisions. And, during the gala, video screens around the ballroom showed a mix of photos from 1960s civil rights struggle and of current activists marching with signs and bullhorns.

The crowd of several thousand people at the Henry B. Gonzalez Convention Center remained rapt for the remainder of Clinton's ten-minute speech. A few raised cell phones to capture video.

He spent most of the address praising Brown, a friend he first met in 1972 when the pair campaigned for failed presidential candidate George McGovern. But even when discussing Brown's record, Trump was there in subtext. True public servants, Clinton said, ask themselves if people are better off from the time they started leading until the time they stopped.

Brown, who grew up in Mineola, Texas, urged the audience to vote in the upcoming midterms and oppose the current president's Supreme Court nominees, who he said are poised to make race an issue for the country for decades to come.