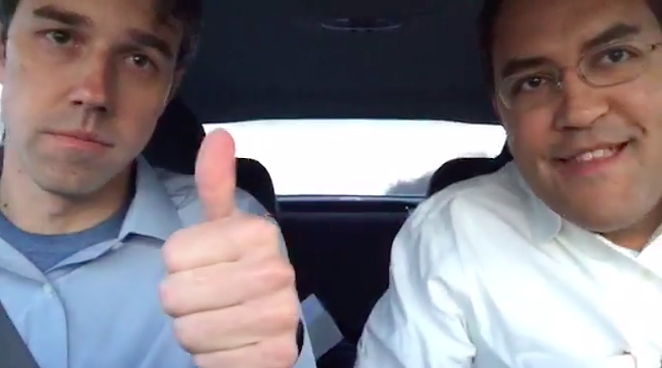 Last week, Allegheny College bestowed the 2018 Prize for Civility in Public Life on Texas Congressmen Beto O'Rourke (D) and Will Hurd (R) for the highly publicized "bipartisan road trip" they took 16 months ago and for the pair's efforts to collaborate on legislation since then.

When presenting the award at the National Press Club, Allegheny College President James H. Mullen Jr. called their 30-hour trip a "town hall on wheels." The prize, given annually since 2012, honors political figures of divergent views who demonstrate an ability to reach across the aisle.

In case you don't remember the details of the lawmakers' trip, here's how it went down. After learning their flights to D.C. were cancelled due to winter storms, O'Rourke and Hurd rented a car in San Antonio and took a 1,600-mile trek to Washington in time for a congressional vote. They even livestreamed the trip with a dashboard cam.

Beyond partisan goodwill and a nifty prize, both lawmakers stood to gain something to gain from the trip. O'Rourke, then relatively unknown outside his district, gained publicity as he was cranking up his campaign against Republican incumbent Sen. Ted Cruz. And Hurd, whose district frequently flips between red and blue, has made repeated efforts to appeal to the middle, even though his voting record leans right.

We hate to inject cynicism into a feel-good story by suggesting either had any ulterior motives. But, hey, they are politicians.